Vanderbilt fired Derek Mason today after nearly seven seasons as head coach of the Commodores. The Vandy job is an interesting case study because with SEC TV deals and a $6.9 billion endowment, they can pay a lot of money. However, it’s a profoundly difficult place to be competitive. Here is a list of possible candidates (note: OutKick founder Clay Travis, a Nashville resident and Vanderbilt Law grad, helped with these suggestions):

Jamey Chadwell – The Coastal Carolina head coach will be a sexy name for openings at bigger programs. A program you’ve never thought of as a football power is 9-0 and in the top 15 in the AP poll this week. Chadwell played quarterback in college in Tennessee, at East Tennessee State.

Steve Sarkisian – Sarkisian had personal issues at USC that led to his exit as head coach of the Trojans five years ago. However, his time at Alabama working as Nick Saban’s offensive coordinator these past two seasons has reinvigorated his candidacy to be a head coach again. His offense, led by Mac Jones this season, is absolutely electric.

Joe Brady – Brady was the architect of the insane LSU offense with Joe Burrow last season, and he’s doing a solid job in the NFL with the Carolina Panthers this year. Just 31 years old, he is a wunderkind who is very much in the Sean McVay / Kyle Shanahan mold of someone who can scheme creative ways to move the ball and get points on the board.

Billy Napier – Like Jamey Chadwell, Napier has led a Sun Belt team to surprising success this season — at 8-1, the Ragin’ Cajuns are no. 20 in this week’s AP poll. Napier was born in Tennessee and it feels like a matter of when and not if he lands a power five job.

Hugh Freeze – Freeze, like Sarkisian, lost a high profile job due to personal issues when he exited Ole Miss in 2016. How long you think people deserve to be out of work or out of the limelight over scandals is a matter of opinion, but it’s undeniable that you get greater latitude for comebacks in this line of work when you win football games. Freeze has Liberty at 9-1 and no. 25 in the AP poll in his second season there.

Jeff Monken – Monken is in his seventh season as coach of Army. It’s always a little weird to think about poaching someone from one of the military universities. However, Monken will have options if he wants them. Just look at Army’s record in the years before and after he got there: 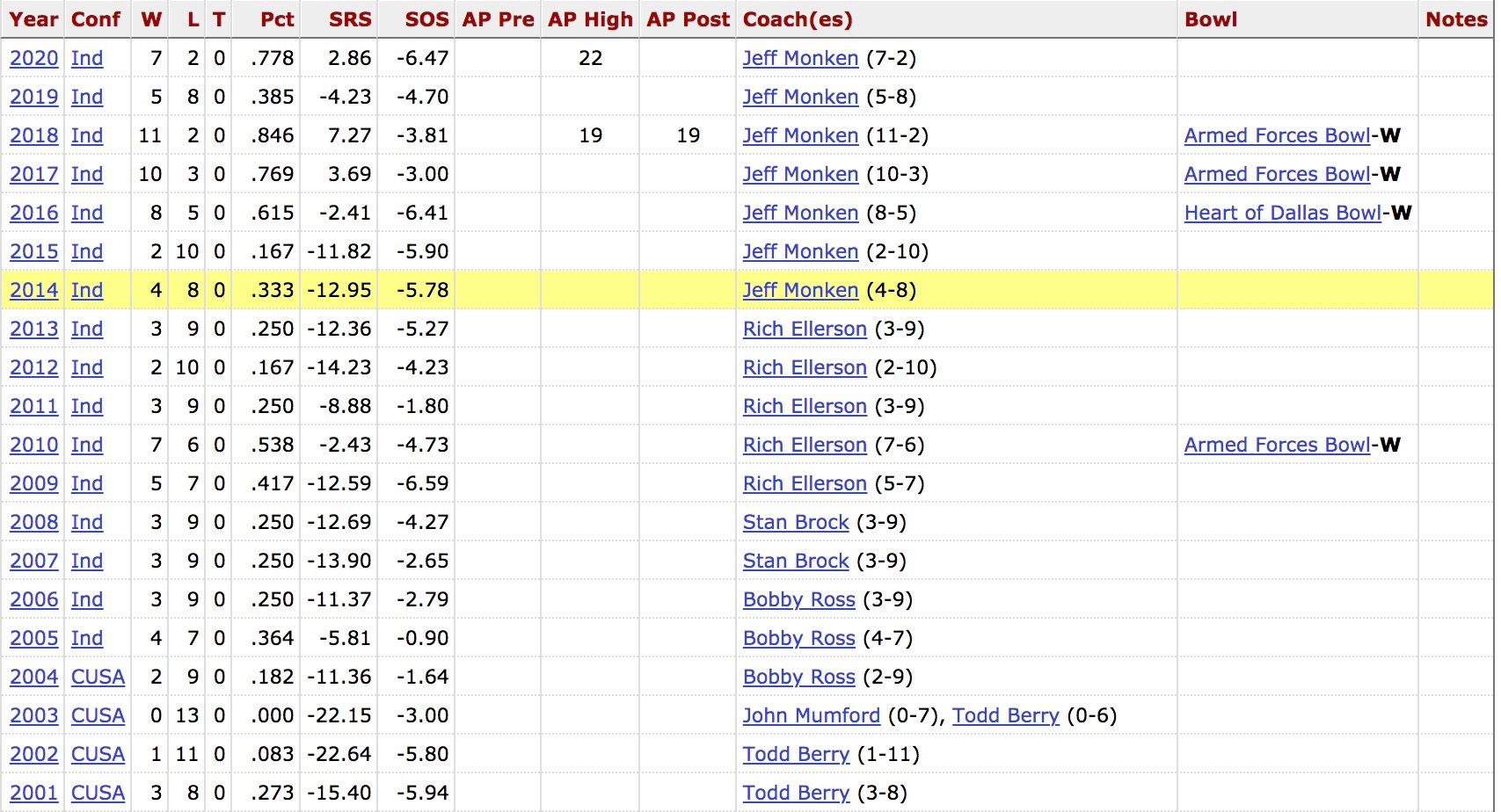 Will Healy – Healy is in his second season at Charlotte; in his first season, they earned a berth in the Bahamas Bowl. Prior to Charlotte, Healy spent a decade coaching in the state of Tennessee — first as an assistant at UT-Chattanooga and then as head coach of Austin Peay.

Ricky Rahne – Rahne was set to be in his first season as head coach at Old Dominion, but their football season was canceled. He has experience with the Vanderbilt program from coaching quarterbacks there from 2011-13.

Barry Odom – Odom is the defensive coordinator for Arkansas. Former Vanderbilt QB Jordan Rodgers tweeted support for Odom to get this vacancy:

I am a big proponent of an Offensive guy at SC because it is not a full rebuild, just redid all facilities, have pieces in place.

Vandy is much different. Need a proven “program builder” and a guy built for this. As a first thought..

Barry Odom has the DNA for this job https://t.co/FlhmUNwnzS

Kendall Briles – On the other side of the ball for the Razorbacks, who have been surprisingly plucky in the SEC this season, is Kendall Briles at offensive coordinator. Briles is an assistant whose name will start coming up for head coaching openings more and more.

Clark Lea – Lea is currently the defensive coordinator at Notre Dame. The Fighting Irish are third in the AP poll this week. Lea played fullback for Vanderbilt in the early 2000s, earning a scholarship as a walk-on.