2021 has been a lousy year, social media says. If true, perhaps the identification of the Zodiac Killer could add a positive chapter to our lives?

The Zodiac Killer, one of the country’s most infamous serial killers, terrorized communities in the San Francisco area in the late 1960s and mocked authorities with unsolvable riddles. Since then, police have investigated an endless list of potential suspects. Now according to Fox News, a team of cold case specialists claims they have finally identified the Zodiac Killer.

The Case Breakers — a team of more than 40 former law enforcement investigators, journalists, and military intelligence officers — believe Gary Francis Poste, who died in 2018, was the real Zodiac Killer. The Case Breakers cite newly uncovered evidence and photos from Poste’s darkroom, with a notable image that features scars on the forehead of Poste that match spots on a sketch of the Zodiac. 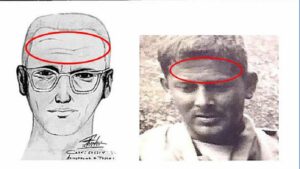 (A sketch of the Zodiac Killer is compared to a picture of Gary Poste. Experts paid specific attention to scars on the forehead in both images, courtesy of The Case Breakers.)

“Other clues include deciphering letters sent by the Zodiac that revealed him as the killer,” said Jen Bucholtz, a former Army counterintelligence agent who works on cold cases. In one note, the letters of Poste’s full name were removed to reveal an alternate message, she told Fox News.

“The team believes Poste also killed Cheri Jo Bates on October 31, 1966, in Riverside, Calif., hundreds of miles south from the San Francisco area and two years before the first killing linked to the Zodiac occurred. Bates, 18, was found dead in an alleyway on the Riverside City College campus after her father phoned police to report her missing.”

The report is fascinating, as is the timing. On October 1, Netflix added the critically acclaimed 2007 film Zodiac to its library. The film, starring Jake Gyllenhaal, Mark Ruffalo, Robert Downey Jr., and Brian Cox, depicts the manhunt for the Zodiac Killer. Certainly, Netflix is about to receive a boost for Zodiac following Wednesday’s finding. Even non-conspiracy theorists may question that coincidence…

Speaking of the film, its directors suggest in the final scene that they believe Arthur Leigh Allen was the name of the Zodiac Killer. Both police and true crime enthusiasts have debunked that theory for years.

Next up for public investigation: Gary Francis Poste.