Shares of World Wrestling Entertainment jumped more than $4 in early trading on Monday to just under $72.

The rise comes as Vince McMahon stepped down as Chairman and CEO of WWE on Friday. McMahon announced his retirement amid a board investigation into “hush money” he had paid to suppress allegations of sexual misconduct.

The jump in stock likely suggests a belief that the odds have increased that the company will sell following McMahon’s departure, an idea OutKick explored on Friday.

Rumors of a sale began when the company brought in ace agent, now co-CEO Nick Khan in 2020.  Now that McMahon, 77, has given up creative control, he has less incentive to hold on as majority shareholder.

At one point, there would have been an argument that the absence of Vince McMahon would sink the value of WWE. However, that’s hardly the case today.

McMahon has not been a regular on television in years, and his erratic booking has loomed negatively over the company.

Monday, WWE announced that Paul “Triple H” Levesque would assume creative control of the content. A buyer could keep Levesque in this role or insert its own booker. 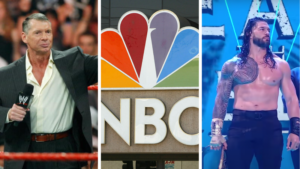 WWE would be an appealing asset to media and tech companies, given its substantial reach on cable, broadcast television, and streaming. The WWE brand comes with first-day name recognition, legacy, and various revenue streams.

I’d list NBCUniversal as the favorite to buy the company. WWE is an important chip in the strategy at NBC. NBCUniversal pays WWE $265 million annually to air Monday Night Raw on USA Network and $200 million to stream WWE content exclusively on Peacock.

Namely, WWE increased the Peacock subscriber base by seven figures.

Thus, it would be a sufficient move for NBCUniversal to own this content outright instead of paying ever-rising broadcast fees.

Shares of WWE are trading at $71.90 as of publication.