An apology used to mean sincere remorse for an error or moment of bad judgment. Apologies now are often acts of surrender, a plea to the woke masters for just one more chance. Today, people apologize because they are more afraid than sorry.

Public figures believe that apologizing eases tensions in such a divided culture. It doesn’t. Their wimpy, inevitable apologies are what fuel the outrage crowd by validating their hypersensitivity.

Each week on cue, some person of influence issues an apology to “those offended.” And last week, the perpetually offended scored two quick wins.

First, 75-year-old crime author James Patterson apologized for noticing that publishing companies are not looking to hire white male authors anymore. Next, Rainn Wilson from The Office said he was very sorry for joking about the term to describe transgenders who breastfeed.

Here are their official letters of regret:

I apologize for saying white male writers having trouble finding work is a form of racism. I absolutely do not believe that racism is practiced against white writers. Please know that I strongly support a diversity of voices being heard—in literature, in Hollywood, everywhere.

Yesterday I tweeted a mean crack about breastfeeding vs chestfeeding. After speaking with some Trans friends and educating myself a bit more I want to apologize for the tweet. It was adding to misinformation and meanness. I’m sorry.

These attacks and subsequent apologies are indicative of a society suffering from severe insecurity and self-loathing. Lisa Boothe, host of the often viral Truth  podcast, discussed this phenomenon in a conversation with OutKick:

“Why do people hate themselves so much? Stop apologizing for the way God made you,” Boothe said of Patterson’s instant apology. “It’s just embarrassing. Shut up already.”

Embarrassing but consistent. And yet, these apologies have been futile.

The politically correct currently have spikes ready for the heads of Commanders coordinator Jack Del Rio and Washington Post columnist David Weigel, who respectively asked for forgiveness after tweeting and retweeting content that fellow blue checks did not authorize to share. Always check for approval before hitting send.

Apologizing to entitled strangers online rarely proves effective. An “I’m sorry” doesn’t make the woke go away. It’s only a sign that you are frightened and thus willing to succumb to their creepy cult.

The Sacraments of the Woke are not forgiving. Remember that when someone digs up tweets from your teenage years and demands an apology from the fetal position. 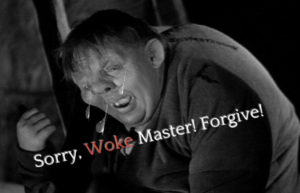 On the other hand, the mob has proven vulnerable to those who refuse to bow to its orders, despite its vilest efforts.

Last fall, Barstool founder Dave Portnoy, a multi-time cancel culture survivor, was the subject of what was clearly a witch hunt to eliminate him from the public space entirely. Business Insider published a hit piece on Portnoy that sought to portray him as an aggressive sexual deviant. The “report” cited two unreliable sources. The report dismissed contradicting evidence to reach its preferred conclusion.

Most people in Portnoy’s position would have issued an insecure apology to all parties involved. PR firms often advise clients to apologize and show faux sympathy, even if they maintain their innocence. But Portnoy didn’t do that. Instead, he released the text messages that Insider ignored and ultimately exposed the report as fraudulent and defamatory.

Portnoy never apologized, and he won. Imagine that.

Similarly, comedian Dave Chappelle refused to retract jokes he made during an October stand-up special called The Closer. The moment the press labeled Chappelle’s jokes “transphobic,” the comedy industry expected Chappelle to lay down and make amends to the purportedly offended. He didn’t. Rather, Chappelle doubled down on his right to practice comedy and let the critics call for his career to no avail.

Chappelle proved that the mob doesn’t have a second gear for those who do not comply. As a result, Netflix is no longer afraid of angry social media posts. The company has since released a memo to staffers to announce it would not “censor specific artists or voices” even if employees consider the content “harmful.”

Social justice warriors are not all that terrifying when you poke your face out from underneath the covers and look them in the eyes. Their smear campaigns work only when the target responds accordingly.

We aren’t dealing with savants with some great backup plan to take over society. So stop trying to compromise with a group that does not compromise.

The same scary vultures demanding atonement for using the “OK” sign, because they think it’s a white power hand gesture, actually thought American families would gather together to watch Buzz Lightyear promote same-sex kissing. They are incompetent and far from intimidating.

Apologizing to this pack of fanatics doesn’t make you reasonable or hip — it makes you complicit in this batty culture in which the most basic words in the English language are subject to political weaponry.

We take you back to last September when Survivor host Jeff Probst apologized for using the word “guys” in his signature phrase, “come on in, guys.”

“For 20 years, I have used one phrase, [guys], to call people in for challenges,” Probst said. “I love saying it. It’s part of the show. But I too want to be of the moment.”

Unfortunately, there is no saving the eunuch celebrities and politicians who walk on eggshells because everything is apparently now a form of cultural appropriation. But perhaps there’s hope for other members of society, whether they are a journalist or are someone important like a semi-driver.

But for extreme circumstances — see Portnoy and Chappelle above — smear merchants often only bombard a target with mean tweets for 36 hours before moving on to someone else around the 37th hour. If you can stomach a day and a half of ugly Twitter comments, then guess what? You’ll likely survive.

So when some schmuck pretending to represent the feelings of a marginalized community comes for you — and they eventually come for everyone — don’t go bending the knee. They don’t have a sword to your throat. They have a Twitter account with flags all over it.

Don’t apologize just because you supposedly offended a stranger online. There’s always going to be at least one miserable professor or journalist with a social media account to say your phrasing isn’t inclusive enough. And in most cases, they are pretending to be offended because outrage is empowerment.

We are allowed to have an opinion, to spread a joke and to even — gasp — make a hand gesture. So stop apologizing if you are more afraid than sorry.