Last week, Insider released a report — behind its paywall — that describes purported violent sexual encounters between Portnoy, 44, and two women in their early 20s. In essence, Insider accuses Portnoy of raping women, which Portnoy has denied.

Portnoy begins the broadcast by showing a screenshot of the initial email Julia Black, the author of the Insider story, sent him eight months ago. In it, Black claims the original story idea didn’t have an angle or agenda, that the outlet simply planned to focus on Portnoy’s career.

Here’s a look at the email Black sent Portnoy:

Portnoy says that Black and Business Insider then quickly shifted away from a look into Portnoy’s career to another, more explosive story idea that would incite reader interest and still protect the publication itself in court since Portnoy could win a lawsuit only if he could prove malice. The new idea? That Portnoy had raped young women. Portnoy says the outlet purposely implies rape throughout the story without using the exact term so as to avoid libel charges.

“As I’ve come to learn, this was Julia covering her tracks to write a hit piece,” Portnoy says. “They knew what [they were] writing from the beginning. But if I could prove that [they were] always out to make me look like a sexual monster deviant, then I can sue [them]. This is like ‘No, no, we had good intentions.’ Yeah, right.”

Portnoy then showed a side-by-side screenshot of Black’s Twitter account before and after Insider published the article. Before Black had a tweet count of 4,151. By the time the article went live days later, her count fell to 132. She had deleted almost his entire Twitter history. Portnoy calls this the “first red flag.” 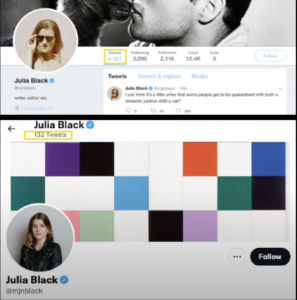 Among the deleted tweets, which Twitter users later dug up from previous screenshots, were negative comments Black made about Barstool, including one from 2017: 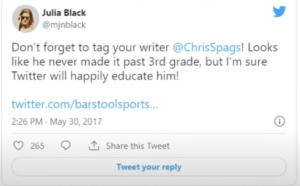 Portnoy claims Black deleted her tweets to erase any evidence of a vendetta against Barstool.

Portnoy also says immediately following the release of the article, an Insider staffer contacted Barstool’s advertisers asking whether they stand by Portnoy. According to Portnoy, Insider was not seeking comment about the story but rather reactions from sponsors after the story was already published, presumably to pressure them into parting ways with Barstool.

Next, Portnoy moves into the report itself, using Insider’s pseudonyms for both women to protect their identities:

“Let’s get into it. So there’s basically, the way I see it, two major accusations, two girls, Allison and Madison. They’ll say a third, but there’s no context, no proof, no nothing. It just basically says, ‘Dave had sex with the girl and it was aggressive.’ No date, no anything.”

The Insider report releases the following details from Allison’s perspective: 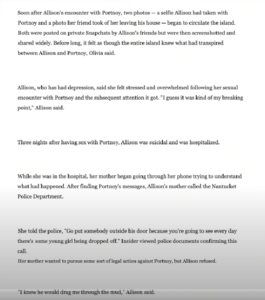 However, the article does not update the story with the following text exchanges between Portnoy and Allison, which Portnoy says he requested they include and that he then reveals during his live stream: 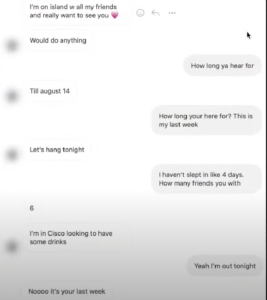 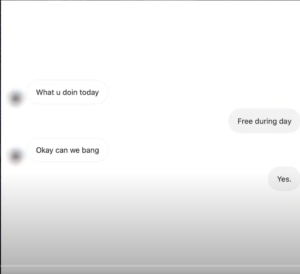 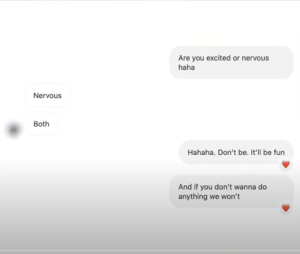 There are a few things to notice here:

The exchange shows Allison, who says Portnoy preyed upon her, as the one asking him to have sex. Business Insider had access to Allison’s DMs — they posted some of them — but ignored this section of the conversation.

Portnoy also alleges that Insider misrepresented the aftermath of the hook-up. The story claims that Allison went into shock the moment she left Portnoy’s house, and word got around the two had sex without Allison’s permission. The text messages two days later show otherwise, that Allison admits she bragged to her friends about having sex with Portnoy.

Here’s that part of the conversation: 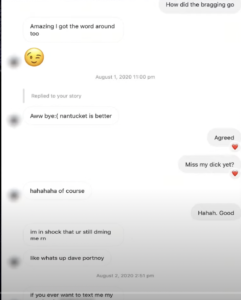 Portnoy says Insider would not update the story with these messages either.

From the 20:00 to 27:00 mark, Portnoy discusses the portion of the Insider story that reveals Allison’s mother called the Nantucket Police Department.

As Fox News notes, “[T]he police report shared by Portnoy didn’t accuse him of any wrongdoing and contradicted many of the claims from the article, specifically how police indicated the woman couldn’t remember anything from the encounter despite the fact that she provided multiple details to Insider.”

Portnoy states that the woman was “dying to hook up with me, that’s how I remember it. She aggressively pursued me. Her mother found out, and rather than deal with the mother, she’s just lied.”

Meanwhile, Portnoy says Madison’s accusations are unequivocally false but also unprovable because they’re a matter of “he said, she said.” To address them during the live stream, Portnoy replays a video he made last week in response to Madison’s allegations last week. In the video, he claims he and Madison didn’t get along at all:

“Now, after we hooked up, we were hanging out more and it just became one of those situations where we just disagreed on just about everything from, you know, is it raining or sunny out? It was oil and vinegar, just two people who did not see the world the same way and that is why she slept on the couch. I do believe, my recollection is, she was still interested in hooking up, and I was like, ‘This just isn’t working. We don’t get along.’ Flew back, I never talked to her again. I never knew she had any issue. It’s the first I heard of it and quite frankly was stunned to read and hear about it. I’m obviously not going to say her name. I don’t want her harassed. If what she’s telling that she didn’t enjoy the experience is true, I had no idea and that’s horrible and I never want to feel that way. But if there was a hidden camera in that room and it wasn’t a he said/she said and someone saw the interaction, there would be absolutely nothing there. I promise you.”

Portnoy then alleges that Madison had been writing comments about her hatred toward former President Donald Trump, whom Portnoy interviewed last fall, after she left his house.

Later in the video, Portnoy says a Barstool fan who follows Madison on social media had screenshotted her posts from last year while she was at Portnoy’s home. Barstool posts the screenshots with Madison’s face blurred out on the video stream. Take a look and read both captions: 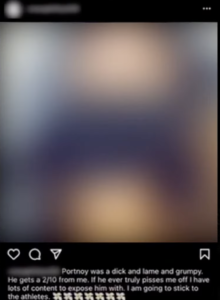 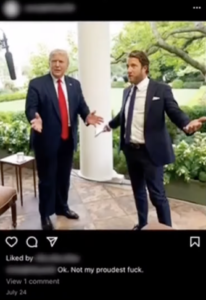 You can find this part of the discussion at the 41-minute mark.

“I think we have a pretty clear agenda,” Portnoy concludes. “I have nothing to hide. I have never done anything inappropriate with any girl. There is nothing non-consensual.”

So what does all of this mean?

Obviously, we at OutKick have no idea what went on between Portnoy and the two women, nor does any other outlet. And while Portnoy and the women have shared their sides, in two different ways, Business Insider also plays a role in the story.

The screenshots in Barstool’s stream weaken Insider allegations and conclusions. If nothing else, Insider appears to have disregarded evidence that debunks its reporting. Why not provide both sides in the original piece or offer an update after the release?

In his livestream, Portnoy shows a screenshot of him asking Insider management to speak with him on his podcast, which they declined.

Portnoy also admits that his lawyers told him he’d have little chance to win a lawsuit against Business Insider because a “famous person cannot win this case.”

Portnoy says he may sue anyway:

“I’m still debating doing this, just to drag them through it. I still may do it just to see them eye-to-eye and be in that courtroom, and this is way more important than money.

“If I lose, I pay their legal fees,” he notes. “If they think I’m done because of that, they don’t know the first thing about me.”

We encourage you to watch the entire broadcast from Thursday:

[All screenshots via Barstool’s stream.]