Do I want to be blogging about some woke ESPN blue checkmark beefing with a former Deadspin writer who also runs around social media with a blue checkmark on an absolutely gorgeous 72-degree day in Ohio? Typically I’d say go ahead and kick the box and let me hang in the public square, I’m ready to die.

But not these days. No way. We’re ready to roll with the 2022 Woke All-Star Challenge where we crown a king or queen (he/him/she/her) of woke in the sports world and here we have a woke vs. a woke.

Mina Kimes, a No. 1 seed in this year’s Woke Challenge, is making headlines this afternoon after she entered battle with D-list woke Laura Wagner, who is well-known inside the disgusting New York City/Brooklyn media landscape hellhole. I’m talking one of those NYC sports media wokes who hates sports, but she continues to work in the field for some reason.

We’re not here to worry about the details.

Let’s get to the fight!

how about women in sports media who shit on other women over trivial things, for self righteous reasons?

I know it’s not about me. I saw who it was about, and I think youre acting like a bully.

Ah yes you’re really punching up at her…for doing absolutely nothing wrong. There are like 90000 things that are actually bad in sports media right now and this was the right battle to pick, for sure.

Laura, I certainly understand the system you're describing. But just because you subtweet people doesn't mean anyone with a working brain and an ability to read your replies can't see who you're talking about.

Woke on woke crime! I have no idea what’s actually going on here, nor do I give a shit, but it’s great theater…especially this time of year!…to see absolute carnage in these woke blue checkmark streets.

Do I give a shit who wins? NOOOOOO SIR!

Give me absolute carnage. GIVE IT TO ME!

In the long run, I think the more productive thought here would be: hmmm, let me do some self-examination about why I sent out these bullshit tweets to begin with.

And look at this, we have another woke former ESPN employee, Kate Fagan, jumping into the ring to throw haymakers at Wagner. There are so many wokes and blue checkmarks fighting in this thread it’s hard to tell where the dust may settle and if these wokes will ever talk to each other — through their masks — ever again.

This is exactly what happens when the Woke All-Star Challenge is released. Emotions start to boil over as contestants get a look at the field and the path they’ll have to take to raise their fist at the very end.

Keith, I’d tell you to put down the phone and spend time with your wife, kids and your job this morning. But you’re over sixty and have none of the three. Congrats, bud. You’re killing it. https://t.co/aVKxwdpslA 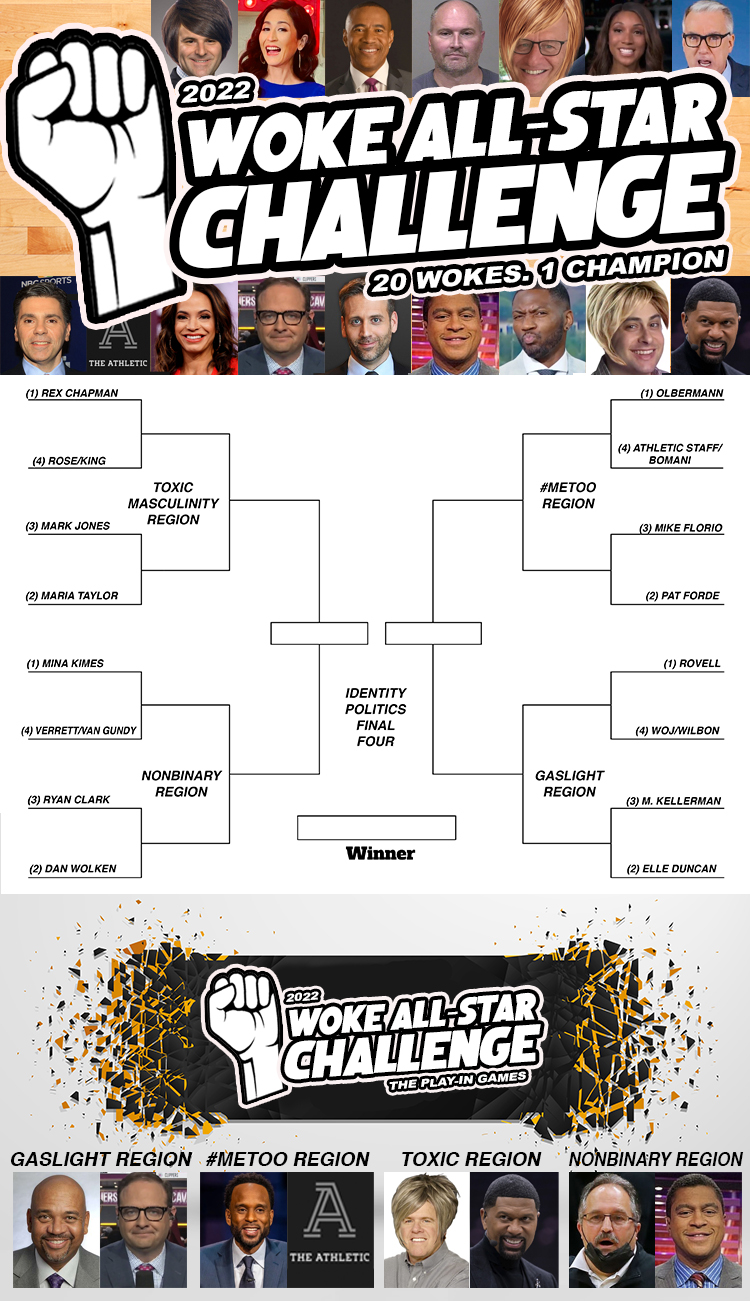