A movie based on the 1985 story of a bear consuming a duffel bag filled with 70-pounds of cocaine is being turned into a movie that will be directed by Elizabeth Banks (Hunger Games, Modern Family, Pitch Perfect), according to The Hollywood Reporter.

The movie aptly titled Cocaine Bear will be based on the events surrounding a 175-pound black bear getting hammered, and ultimately dying, after partying with 70-pounds of coke that fell from the sky.

How did the cocaine magically get into the woods? The New York Times filed the following report in 1985.

“A 175-pound black bear apparently died of an overdose of cocaine after discovering a batch of the drug, the Georgia Bureau of Investigation said today. The cocaine was apparently dropped from a plane piloted by Andrew Thornton, a convicted drug smuggler who died Sept. 11 in Knoxville, Tenn., because he was carrying too heavy a load while parachuting,” the Times reported Dec. 23, 1985.

“The bureau said the bear was found Friday in northern Georgia among 40 opened plastic containers with traces of cocaine.

It’s unclear what perspective Cocaine Bear will be written from, but the story about how the drugs ended up on the ground and consumed by the bear are wild. Andrew Carter Thornton II, “a former narcotics officer and suspended lawyer,” as the Associated Press described him in 1985, fell to his death from a plane loaded with $14 million ($34 million in current dollars) worth of cocaine. Thornton ended up dead in a Knoxville driveway. He was carrying 77 pounds of coke when cops found his body. At the time, they believed Thornton, who was described as an expert skydiver who had a stint in the 101st Airborne during the 1960s, was going to deliver the 77 pounds of coke to someone on the ground. 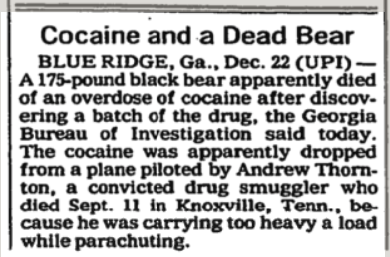 The plane he was flying in was set to autopilot as he jumped and eventually crashed. The story goes that Thornton dumped duffel bags of cocaine along his route to shed weight in his plane. Cocaine Bear found it and partied – HARD.

Legend has it that a medical examiner responsible for doing an autopsy on the bear gave the following report: “Its stomach was literally packed to the brim with cocaine. There isn’t a mammal on the planet that could survive that. Cerebral hemorrhaging, respiratory failure, hyperthermia, renal failure, heart failure, stroke. You name it, that bear had it.”

With all that said, are you in or out on Cocaine Bear? This has all the components to be huge from Miami, to New York, across SEC country and all the way to Los Angeles. Now it’s time to see if Banks and her team can pull this off.