There are stories on the Internet that are going to galvanize women around the world. This is one of them. This cry for help on Reddit (r/TrueOffMyChest) from a woman struggling with infertility who was completely blindsided by her husband who was trying to save some cash and suggested knocking up her sister who could act as the surrogate.

Is it one of the boldest strategies in marriage history? Yes. Are there people up to crazy things in this world? Yes. Is this guy the craziest shooter’s shoot in the history of shooter’s shoot? 110%.

Let’s dive into a story you’re going to be sharing with all your buddies who have SILs.

“My husband and I have been struggling with infertility,” u/throwRASister9977 writes. “We’ve tried some options and right now we’re looking into surrogacy. My sister agreed to do it but my husband said he looked at how much time and money IVF would take and slowly started hinting that we take the traditional way.” 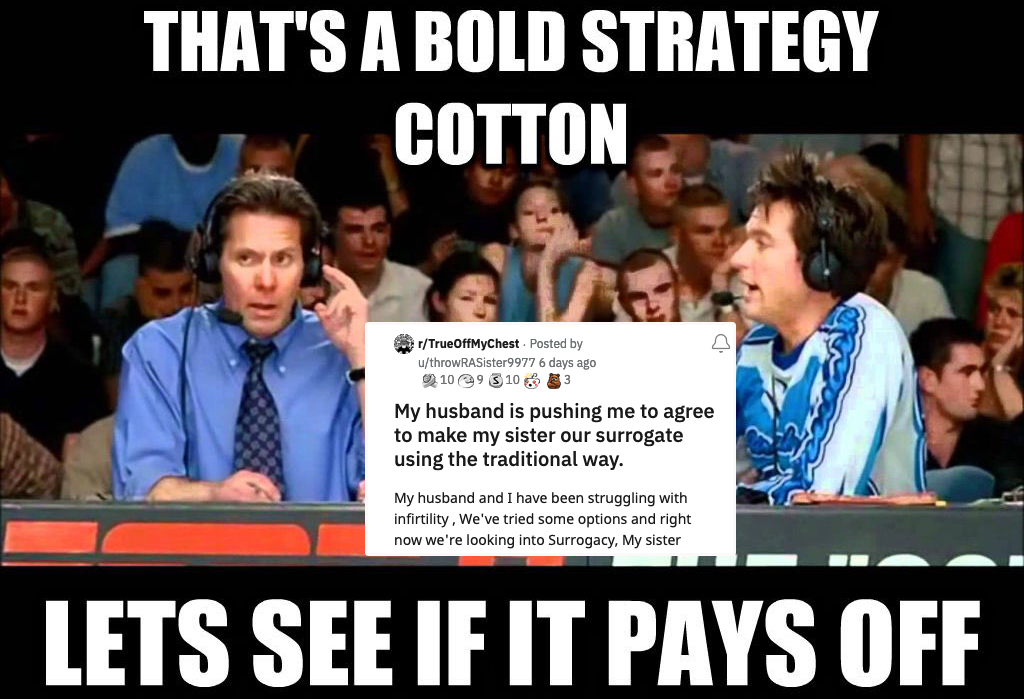 “I was too shocked to even say anything but he acted like what he said was not even that big of a deal. He explained that it’s just a quick way for us to have a baby and spare the money and time to use later,” u/throwRASister9977 continues.

“I’m 100 percent against it, that is why I’m backing down and am no longer comfortable with this whole surrogacy route…I can’t even imagine my sister’s reaction once she hears my husband’s suggestion.”

Yeah, how do you even have that conversation? Perhaps a tequila, chips and salsa night might be the best route. Lots of tequila. But the husband doesn’t seem to mind popping major questions at women, so let him fire away with the sister-in-law.

As expected, the wife, 34, is “devastated” that her husband, 37, would even consider having sex with her sister, 30, and the memories that would come after executing such a plan. That’s true. Think of all the Thanksgiving meals and the emotions that would spill out.

Look, I’m no divorce attorney, but I have to believe this marriage is on thin ice.

“I feel so devasted and like my body is useless and has failed me to the point where I could expect any negative comment on it whether true on not. emotionally and mentally… I just can’t express how I feel right now,” u/throwRASister9977 writes.

Why do I get the feeling the husband is already having an affair with the sister-in-law? As a Reddit poster pointed out, this would be the perfect time to drop the, ‘Hey, we’ll just take care of this infertility thing’ line.

The obvious conclusion here is that the wife files for divorce and the husband ends up marrying the sister-in-law and they have six kids.

Hey, it’s a f–ked up world, might as well keep the trend going, right?