UPS driver Anthony Gaskin was just doing his job, but the residents in a Richmond, Virginia suburban neighborhood consider what he has done for them during 2020 to be more than just a job. At some points during the year, Gaskin was the only person some residents would see for days on end.

Residents decided to say thanks as a group by holding a celebration as Gaskin drove his truck down a road lined with people saying thank you.

“Through COVID, Anthony has continued working, delivering packages at our doors, record numbers of them, over 180 times to date,” Patty Friedman told WTVR CBS-6. “I wanted to thank him personally for how much he helped me feel welcome when I moved in during a pandemic. It was terribly lonely, and he was always the highlight of my day. Mentioning this to a few people and the response I got was all I needed to know I was not alone.”

“Arriving on bikes, on foot, and in more than 75 cars, hundreds of Hallsley residents lined the road and waited for Anthony to turn the corner,” Friedman wrote in an email to the TV station. “A humble man, he needed to be coaxed, but eventually, slowly drove his truck down the road while children and adults held up signs, screamed his name, honked their horns, and rang bells.”

Even though his truck does not have sirens and his uniform does not offer added fire protection, Anthony Gaskin is…

UPS has been so inundated with packages that at one point on Cyber Monday, the company announced it would stop picking up packages from some of the nation’s largest retailers. Online sales topped $10.8 billion on Cyber Monday as COVID and the ability to purchase over a phone has turned drivers like Gaskin into heroes.

The final e-commerce economic numbers for 2020 will be staggering. In May alone, U.S. e-commerce spending grew by 93 percent year over year in May, according to UPS.

Way back at the beginning of the COVID craziness, Clay touched on this subject and the people who kept this country churning along this year. Listen to what Clay had to say on March 27.

"I gotta give a shout out to people who aren't paid very much but are doing incredible work. They work in grocery stores, gas stations, convenience stores, mailmen, UPS drivers, Amazon, FedEx. Every day in harm’s way to keep American commerce rolling. Thank you." @ClayTravis pic.twitter.com/kEkXrZDzS7

The Gaskin story on Facebook has led others to share their appreciation for their own delivery drivers, including a post from Kathy Feder whose dogs actually enjoy the UPS lady.

“One of my best friends Misty Welborn is a UPS driver and not only do the people she delivers to love her…all their fur babies do too…thank you for being essential to all of us stuck at home…not to mention on her way home from 12 hour days she stops by to wave hi through our fence to my daughter who has cancer…they are truly amazing,” Feder wrote. 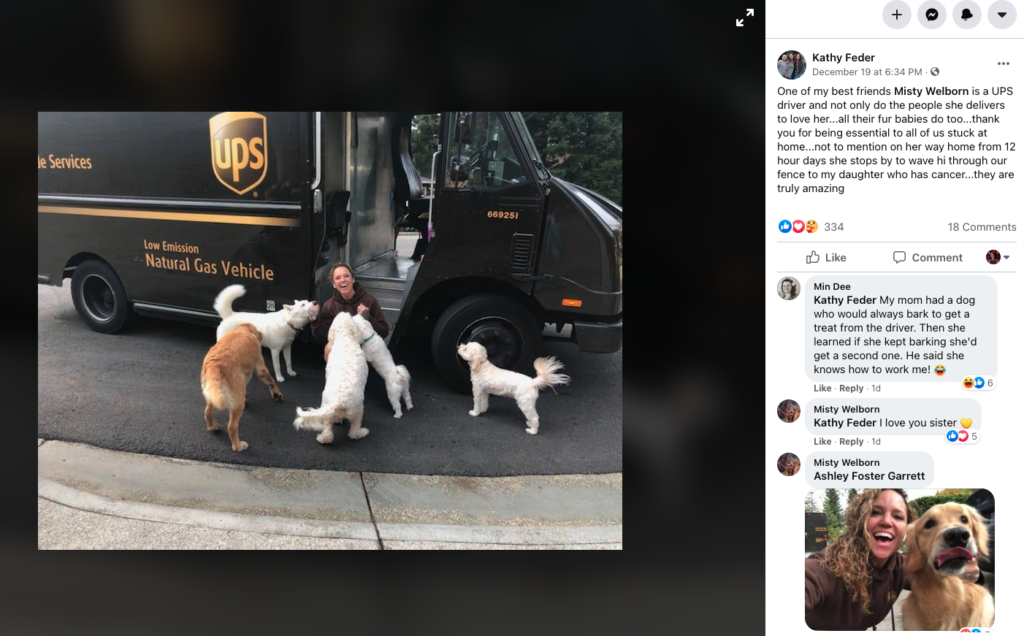 Gaskin was brought to tears by the people in Virginia who showed their appreciation. His supervisor also showed up to show his appreciation for Anthony’s dedication to the company. Then Gaskin went back to work as the packages keep being ordered. Amazon is offering same-day delivery on Christmas Eve.