We’ve been writing a good deal about Arch Manning, who is the son of Cooper, nephew of Peyton and Eli, and grandson of Archie. The younger Manning is a sophomore at Isidore Newman High School in New Orleans, and in the team’s first game he threw for five touchdowns and ran for one more. MaxPreps has video:

If you watch to the end of the video, you see that Arch Manning can also make plays with his feet. Ultimately, Newman defeated East Jefferson 41-0 on Thursday.

As we wrote previously, Arch Manning is the top-ranked quarterback and fifth-ranked player overall in 247’s initial top 100 recruiting rankings for the class of 2023.

The recruitment of Manning is going to be a story unlike what we’ve probably ever otherwise seen in football. His uncles were also highly touted, yes, but this was before the internet age where every morsel was hyper scrutinized. I know, there’s an irony in saying that as we’re perpetuating it.

According to Rivals, already has offers from Duke, North Carolina, Alabama, LSU, Tennessee, Ole Miss, Georgia, Arkansas, and Florida State. It would hardly be surprising if quarterback factories Clemson and Oklahoma also got into the mix. 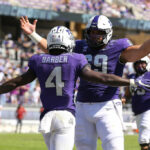 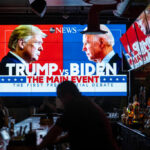