It was a night to remember for Los Angeles Rams WR Van Jefferson. The former Florida and Ole Miss wide receiver played in the Super Bowl, helping lead his team to the championship, then bolted straight from the field to the hospital. After celebrating on the field for a few minutes, Jefferson grabbed his daughter and rushed to the hospital, as his wife went into labor during the game.

Update: Van Jefferson and his wife welcomed a new baby boy to the world, just hours after winning the Super Bowl. Here’s a picture of Jefferson with his son. 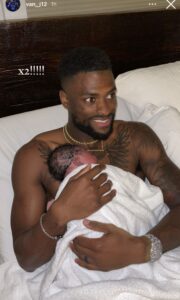 The Rams wideout knew there would be a chance this could happen on Super Bowl night, but his wife Samaria had told the team not to tell Jefferson if she went into labor during the game, according to The Athletic.

Well, midway through the game, it happened. According to multiple twitter posts, Samaria was rushed out of the stadium and to the hospital for the birth of their new son. All of this was happening while Jefferson was on the field, trying to win the Super Bowl in the second half.

Van Jefferson grabbed his daughter as she and his dad came into the field and sprinted through the locker room and is heading to the hospital right now. Samaria, his wife, is having their son and was rushed to the hospital mid-game as she went into labor.

After helping his team drive down the field and score the game-winning touchdown, the final seconds ticked off the clock and Jefferson was a Super Bowl champion, but also about to have another baby.

Van Jefferson hustling out of the stadium to get to his wife in labor #SBLVI pic.twitter.com/0GDW0ceWLf

He was rushed through the locker room, with his daughter and father with him, and headed straight to the hospital to be with his wife. The night that already included a Super Bowl win was about to get even better for the wideout.

Talk about a fairytale ending. You win a championship and will welcome a new member to the family. It doesn’t get much better than that for the former SEC wideout.