Former Virginia Tech soccer player Kiersten Hening has filed a federal lawsuit against Hokies coach Charles “Chugger” Adair, claiming the coach benched her and “subjected her to verbal abuse” and ultimately forced her off the women’s soccer team because she refused to kneel before soccer matches.

According to the lawsuit first reported by the Richmond Times-Dispatch, Hening, a junior out of Midlothian, Va., was a “talented defender” who started her freshman and sophomore seasons and played the third-most minutes on the team in 2019. As she began her junior season in 2020, the suit alleges, Hening had the most minutes played on the roster and she was even selected to talk to the media before the season began.

The lawsuit alleges that on September 1, 2020, a student-athlete advisory committee discussed proposals for student-athletes to wear BLM COVID masks, BLM wristbands, armbands and BLM shirts during warmups. The soccer team discussed the proposal and “most” players supported the idea. Hening claims Adair supported the proposals and went even further with an idea to replace “Hokies” on the back of the team uniform with the names of alleged victims of police misconduct. 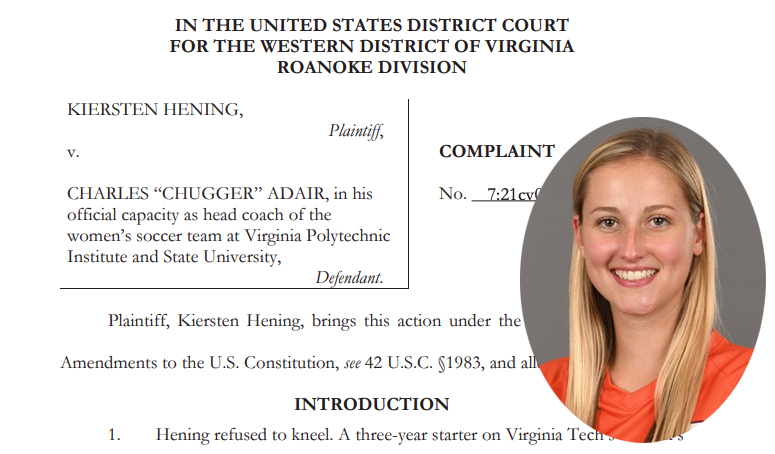 Adair also allegedly expressed support for those who took a knee before games. Hening “quietly dissented.” She says in her suit that she supports social justice and believes that black lives matter, but that she doesn’t support the Black Lives Matter organization, especially its mission of defunding police and eliminating the nuclear family.

Shortly after that meeting on Sep. 1, Hening expressed her concerns through text messages with other players. The texts were then converted to screenshots that made it back to the coach. By September 3, players demanded that Adair address the texts and “the fact that some of his players were ‘racist’ and did not support BLM.”

Hening states in her suit that at a September 12 game against Virginia, Adair made her the subject of a tirade because she wouldn’t take a knee with the rest of the starters before the match. The “campaign of abuse,” as Hening calls it in court documents, continued until she ultimately left the program on September 20.

Hening is asking for the court to declare that Adair violated her First and Fourteenth Amendment rights; that she be reinstated to the team; that she be granted compensatory damages, punitive damages, and nominal damages; and that Adair undergo First Amendment training.