The story of the spring in college football — how a football imposter walked in off the street and became a member of the USC Trojans — took yet another twist during a recent podcast when Joshua Pryor, 25, sat down to do a podcast with a USC quarterback to explain his day on the team.

The imposter told USC quarterback Mo Hasan, former University of Miami QB Brad Kaaya and ‘Momentum Truck’ co-host Justice Shelton Mosley that he found an open door to the Trojans complex and walked in. Pryor proceeded to jump into the hot and cold tub and eventually saw head coach Clay Helton playing golf — USC’s Heritage Hall features an indoor golf simulator — and ultimately made it all the way to the practice field where the imposter started fielding punts before being caught by a team staffer.

Pryor’s rundown of his day:

• He sneaks into the team facility as a custodian was coming out of a room. Pryor, in USC gear, walks by and presumes the lady thought he was a member of the team.

• First stop: the hot and cold tubs where, according to his estimates, he spent two hours going back and forth between the tubs. 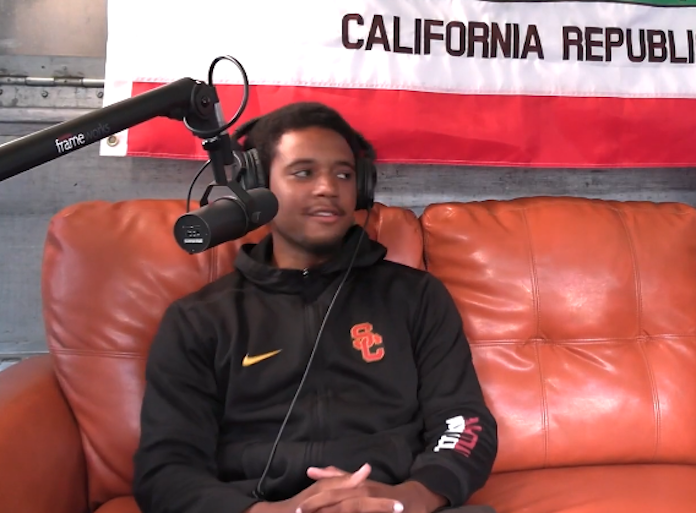 • Eventually he gets out and starts wandering around the complex and spots Helton crushing golf balls. He starts thinking of interrupting Helton to introduce himself and hopes the USC head coach will offer him a scholarship.

• Instead, Pryor heads off to get him some food. Upon his return to the complex, he notices the locker room door is open and walks in.

• The team is out at practice so Pryor gets dressed and heads out, acting like he was late due to a study table that ran late.

• He notices the punt drill going on and helps himself to the experience. The first one is no problem. Then he drops the next two offerings.

• Hasan notes that the No. 87 worn by Pryor belongs to his roommate who wasn’t practicing that day.

Pryor enjoying his day at the USC football training center: