UFC fighter Colby Covington wore a “Keep America Great” hat during a press conference and it was epic. His attire was in response to Tyron Woodley wearing a hat that read “Make racists catch the fade again.” ahead of their fight this weekend.

.@ColbyCovMMA weighed in on Tyron Woodley's press conference attire and message ahead of #UFCVegas11.

Seems that pandering for social media attention became celebrity athlete’s favorite pastime. Worth noting that one hat focuses on people they disagree with, while the other focuses on America.

This fight might take the cake as UFC’s most polarizing in years with political bragging rights on the line. Nothing has proven to make people more mad than being disrespected for your beliefs.

Tyron Woodley’s original gesture is just a materialized moment of what half the country believes: Voting for Donald Trump immediately qualifies you as a racist and no dialogue is necessary to explain your position. While it’s disappointing Woodley felt comfortable enough to disrespect Covington for his beliefs, it’s also his job to sell tickets for this fight.

No better way to fire up the Covington-Woodley fan bases than instigating a political war of hats. Part of this is business, but it goes to show where our country is right now.

The fight is this Saturday at and we won’t miss it. #UFCVegas11 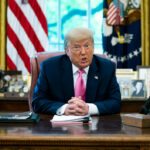 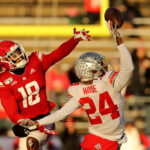