Fox News is in round 2 of auditions for its new 7 pm opinion program, Fox News Primetime, with Trey Gowdy back for a second week.

As we reported at OutKick two weeks ago, Gowdy’s first week on the show opened eyes both internally at Fox and externally around the media industry with the show’s spike during his week.

Here are the numbers, in order, for each of the seven hosts’ first week:

This week, Monday-Wednesday, Gowdy is on track to record the highest week yet with a current 2.1 million average. Each episode this week has hit 2 million viewers, with Tuesday coming in at 2.2 million, a large number for 7 pm. Furthermore, Gowdy has topped the show’s lead-in, Special Report, two of the three days.

I continue to make clear that there are several reasons why a show with a tryout host draws the number it does. The news cycle, the lead-in number, guests, competing programs, and so on all contribute; it’s not merely the person driving the bus. For example, though Pavlich’s week ranked 7th, she performed well. Ratings for the auditions will not simply win a host the job, but it matters, and Fox News is looking, seeing trends.

All in all, it is still too early to say Gowdy, as a host, is a bigger draw than the rest, though after eight episodes, it’s accurate to say the viewers like him, he holds Special Report’s audience, and viewers would watch the program if he were named the permanent host. Speaking to sources, Gowdy is, if nothing else, making a case. Cases are sometimes rejected; other times light bulbs go off. 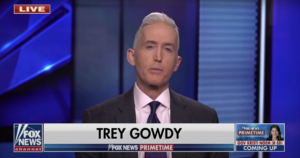 OutKick is told a final decision is not made, which takes me back to Brian Kilmeade.

Gowdy has been impressive both on-air and in the ratings, but so has Kilmeade. It’s fun to put a name next to the highest total, yet Kilmeade only trailed Gowdy by 20,000 viewers — that’s not much in cable news. In addition, Kilmeade had the highest rating among adults 25-54, cable news’ coveted demographic. That’s just on the viewership side, Kilmeade too had a strong performance in his first week. Kilmeade, with 20-plus years on Fox & Friends, has a clear Q-rating advantage over the pack and works best with various guests.

Kilmeade will soon return to host a second week of Fox News Primetime, sources tell OutKick, perhaps as soon as in two weeks.

Media openings are complicated, as much as viewers assume the job will go to the best candidate, backstage politics get involved and result in head-scratchers. Don’t rule anyone out yet. It’s also still early; give the others another week and perhaps the list narrows. That’s if Fox is set on only these seven names. Fox News made a mistake not including Pete Hegseth and Will Cain, two personalities with ceilings higher than most at the network.

Let me know who you’ve liked best below or on Twitter, @Burackbobby_