Matt Trent, the weekend sports anchor at WBRZ in Baton Rouge, congratulated Trevor Lawrence on his engagement to girlfriend Marissa Mowry and then took a shot at the Clemson quarterback that included a daddy reference to Joe Burrow. It was Matt playing to his LSU base, but it didn’t sit well with Clemson fans and eventually word got back to Trevor that grown man Matt took a shot.

Well we know how that ended. Trevor had no choice but to launch an assault back at Trent and you have yourself an old fashioned college QB vs. weekend sports anchor beef-off. “Hahaha I love when grown men try this hard to talk about me,” the 20-year-old future first-rounder shot back. Lawrence, probably figuring it wasn’t worth it to worry about a Baton Rouge grown man weekend sports anchor, eventually deleted his artillery and went back to work looking to stay undefeated at home during his career.

Nothing better than seeing your son take the next step as a man.

I know some of you will think this is all so petty and ridiculous. I would say to you that this kind of stuff is what makes college football great. The back and forth. The battles in the trenches. The shots that trigger fan bases and turn into College GameDay signs. The sport needs this kind of war of words.

Trent had his 5 minutes of fame and now goes back to work trying to figure out a path out of Baton Rouge and up the local TV ladder. 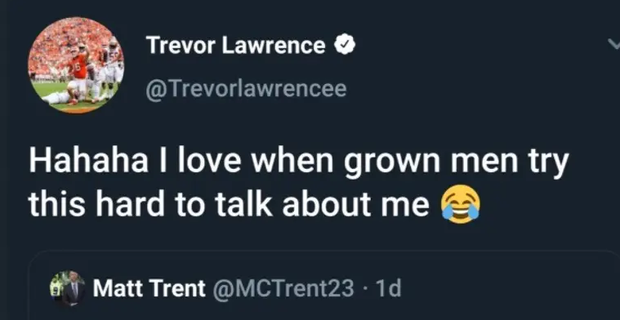 Fun + Restful time at the beach🤍

A day in Chatt celebrating (only a couple days.. ok weeks late) my sweetest friend Court!!! Thanks for always being such a steady, selfless friend. Love you always❣️

As always.. thank you @asiatennillehaynes for the best hair! You rock 🤩

Couldn’t be happier or more thankful. I love this life I get to live🖤