This could be the worst retirement party ever. For years, we’ve loved Tom Brady. For decades, actually. He’s the greatest of all time. Then, he just needed to get away from that grump, Bill Belichick, and that made perfect sense to us.

And now, it turns out, Brady is kind of, well, just not all that likeable. He has gone from the GOAT to the thing that wouldn’t leave.

He can’t complete a long pass, doesn’t remember what down it is in crunchtime — Brady time? — slumps his shoulders and rolls his eyes every time something goes wrong. He’s a 43-year-old teenager wondering why everyone keeps ruining his life. And when he loses, he won’t shake his opponent’s hand, but instead just stomps off. His little-boy haircut doesn’t help things either.

This Sunday, Brady has one of his last chances to salvage this thing when he faces Patrick Mahomes, the present and future of the game. That should be a great buildup, as the two most-recent Super Bowl champion quarterbacks face each other, even if Brady plays for Tampa Bay now instead of New England.

Brady needs this game. The thing is, you can’t combine a petulant personality with fading skills. It can only be one or the other, at most. If Brady still came off as a good guy, then he could get away with being a little inconsistent on the field or even falling to pieces, which he now does any time he’s under pressure.

But if this is his personality, then he’s going to have to win, win and win some more. Then the poor sportsmanship can be written off as him just being a tough competitor who gets a little carried away, a champion’s heart.

Brady is still among the top quarterbacks, but he just seems so past his time. If his legacy matters to him, he would have done himself a favor by leaving after he won the Super Bowl two years ago.

Who wants to watch him this way? It’s hard to accept this new personality. Or maybe this personality isn’t new at all. Maybe Brady was always like this, and we just didn’t notice it when he was in New England because he was standing next to Belichick.

By contrast, Brady came off great. So maybe Belichick was protecting him that way.

Brady’s new coach, Bruce Arians, doesn’t seem interested in doing that. Brady has the inconsistency and shortcomings of an aging player. And Arians keeps pointing that out.

“I think he’s getting confused a few times with coverages that might be causing some inaccurate balls,’’ Arians told reporters this week ”I don’t see it at all in practice. We’re not missing the deep ball at all in practice, that’s for sure. It’s just a matter on Sundays of hitting them.’’

Brady has missed 22 straight pass attempts of 20 yards or more, according to NextGenStats, the worst of any quarterback since 2017.

Does Arians need to change his offense and stop going deep downfield so much?

“We’ve got guys open. We’ve just missed them,’’ he said. “And there are times when coverage dictates you go to that guy. I think we can do a better job of utilizing the deep ball in our gameplan. . .

“But when they’re there, we need to hit them. We can’t have them going off our fingertips, and we can’t overthrow them.’’

Meanwhile, Brady lost to the Chicago Bears and quarterback Nick Foles and then didn’t shake Foles’ hand afterward. That was a game that set Brady up for one of his patented last-minute game-saving drives, but he fell apart under the pressure and the beatings of the Bears defense and then lost track of the downs.

Brady told reporters later that he just didn’t think about shaking Foles’ hand, that it was nothing personal. He said he shakes hands with some of his close friends and longtime quarterbacks but sometimes doesn’t shake the hands of others.

I read that this way: “I shake hands only with superstars at my level. Foles isn’t there.’’

Brady also didn’t shake hands with quarterback Jared Goff after losing to the Los Angeles Rams this past week. And FoxSports1’s Shannon Sharpe, a Hall of Fame player, tweeted this:

“I guess Brady doesn’t know Goff well enough to shake his hand after losing. Yet he knows every qb after he wins. Brady is full of what the elephant left on the show ground. His attitude is bulljive and hit’s time to call his A** out on it.’’

Brady did shake Goff’s hand after beating him in the Super Bowl a few years ago.

So now Brady-Mahomes. Brady can play his way back into a nice goodbye or be gracious in defeat. If he chooses neither, then he can at least try a different haircut. 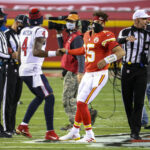 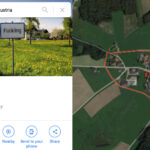