Want to feel old? Today is June 3, 2021, and that means McLovin from Superbad is celebrating his 40th birthday. Pull out that nugget today when you’re standing around the watercooler. For those of you who have no idea what I’m talking about or perhaps you’ve been in a coma for the last 14 years, let’s go back to the 2007 cult classic film when Fogell, played by Christopher Mintz-Plasse, who is 31 in real life, gets himself a fake ID to buy beer and liquor for his crew to take to a party.

As for the 892 Momona St., Honolulu, Hawaii address used on the ID, the word “momona” translates to “fat” in the Hawaiian dictionary.

Evan: Fogell, where have you been, man?

Seth: You almost gave me a goddamn heart attack. Let me see it. Did you p*ssy out or what?

Evan: [examining the fake ID] Hawaii. All right, that’s good. That’s hard to trace, I guess. Wait, you changed your name to… McLovin? 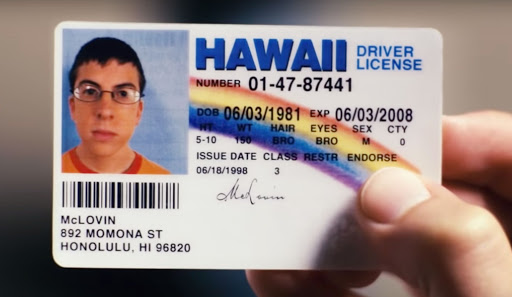 Evan: McLovin? What kind of a stupid name is that, Fogell? What, are you trying to be an Irish R&B singer?

Fogell: No, they let you pick any name you want when you get down there.

Seth: And you landed on McLovin?

Fogell: Yeah. It was between that and Muhammad.

Seth Rogan said in 2016 that there would never be a Superbad 2 in which we’d see what a 40-year-old McLovin is up to these days as a suburban dad.

“To us, it was such a personal story. It was about us, and there was just no… So what? Now the next one is about how we’re going to college? But we didn’t go to college together. I didn’t go to college. It seemed very inorganic, but that was the only reason, really,” Rogan told Cinemablend.com in 2016.