The Titans-Steelers game originally scheduled for this Sunday had already been postponed, but there was some hope it could be played Monday or Tuesday. Now, Tom Pelissero of NFL Media reports that the game will be postponed beyond Week 4:

The NFL is rescheduling the #Steelers–#Titans game to later in the season after an additional Titans player and one personnel tested positive for COVID-19. It will not be played Week 4.

The new positive tests from the Titans bring the total to five players and six members of the organization who have tested positive for Covid-19.

Earlier this week, Nashville sports reporter Steve Layman perused the schedule and proposed what seems to be a sensible idea: 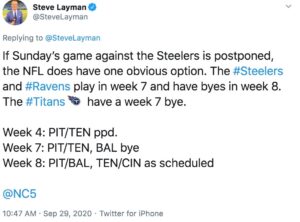 That being said, the Titans very well may not be the last team to have an outbreak and the NFL is hardly going to be able to take four or more teams and shuffle them around like this on the fly with regularity. The league may have to bite the bullet and either make it so the playoffs are determined by best winning percentage, or add a week or two to the regular season to address all of the postponements equitably.