The 2015 Carolina Panthers are the most underrated 12-0 team in recent memory.  But don’t take my word for it.  Trust to the largest, most finely tuned ratings on the planet:  those of the sports betting linemakers.  Every week, lines are carefully set using every tool available by sports books, and then they are bet into place using millions of dollars from the sharpest sports betting groups in the world.  Therefore, just before a game kicks off, the line is as efficient as it will be all week.

And according to that line, no 12-0 team has been as underrated or surprising as the 12-0 Carolina Panthers.  There have been just nine 12-0 teams in NFL history.  Seven have come in the last 25 years.  Using the line it is easy to determine which of those teams were most likely to be 12-0 or which were least likely.  A team who is favored by 20 points to win a game will win that game far more often than a team who is favored to win a game by a single point.  Here are the only NFL teams to start 12-0 in the last 25 years, along with their average line from those 12 games, sorted by largest line (biggest favorite) to smallest line: 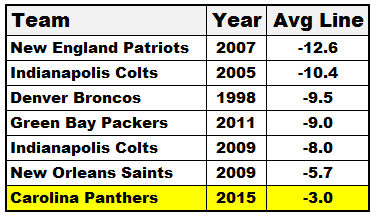 Of all of these teams, the Panthers are the team least likely to still be undefeated after 12 games.  Yet remarkably, in only two of those 12 games have the Panthers been tied or trailing their opponent in the 4th quarter, despite being favored by only 3 points on average.

The fact that the Panthers, while being favored by only a field goal on average the last 12 weeks, never lost is a testament to their ability as a team to win games.  They may not have the NFL’s top ranked offense or defense, but they have been a tremendous team that can beat you in a variety of ways.  They have shown the ability to start fast and win wire to wire.  They have allowed opponent’s to claw back into games but have hung on for the win.  They have needed to execute 4th quarter comebacks.  They are tremendously efficient thru the air despite one of the least touted receiving corps in the NFL.  And they can run the ball to either put up points or kill the clock.

With their roster talent and schedule, the Panthers should not be 12-0.  Their preseason projected win total was 8.5 wins this year, and they were heavily bet to the under by the largest and sharpest sports bettors on the planet.  Their week to week lines are indicative of them not possibly avoiding a loss by this point of the season.  It seems most every week, sharp bettors are fading the Carolina Panthers, yet the Panthers continue to prove them wrong, going 9-3 against the spread this season.

To illustrate what they are working with on offense:  in a passing league, their leading wide receiver is Ted Ginn, Jr.  Ginn is a player in his second stint with the Panthers after they declined to re-sign him once before and who has floated around the league.  A 9th pick in the first round of the 2007 NFL draft by the Miami Dolphins, he was traded away after the 2009 season for a 5th round pick, which shows how much they valued him.  He started only 3 games in three years in San Francisco before his contract expired.  He was then signed by the Panthers for one year, started two games, and was not re-signed.  Next, Ginn signed a three year deal with the Cardinals but was cut after one year with only 14 catches.  And now, Ginn is Cam Newton’s leading wide receiver on just the ninth 12-0 team in NFL history.

The Panthers are led by a phenomenal, talented, dual threat quarterback who is playing the best football of his career.  Equally as impressive, Cam Newton just signed his lucrative new contract with the Panthers last season.  Many players regress after a new deal, and it’s not hard to point fingers at many of Newton’s peers in that respect.  But not Cam.  He’s playing his best, and leading the Panthers to an incredible season despite losing so many offensive pieces last offseason.

Unlike the 2007 Patriots, winners of three Super Bowls the previous 6 years, or the 2009 Colts, who made the playoffs seven straight seasons prior to 2009, the 2015 Panthers don’t have that pedigree or track record.  The Panthers have had one winning season in the last 6 years.

According to the sharpest minds on the planet, those responsible for risking millions of dollars every week based on their perception of NFL teams, the Panthers should not be 12-0.  For their week 14 game, the Panthers were lined as only 7 point favorites at home against the 6-6 Atlanta Falcons.  And you guessed it, the early, sharp money came in on the Falcons, fading the Panthers once again.

Yes, the Panthers surely are the most underrated 12-0 team in NFL history.