The opening forty minutes of the quarterfinals of the SEC Tournament on Thursday did not go exactly how the few thousand Florida fans in attendance wanted. The Gators came into this matchup with high hopes of feeding the crowd with excitement, but ended up sending them home with disappointment. Texas A&M ended up winning 83-80, in a game that was never really close.

For a noon tip-off on a Thursday, the crowd filled in nicely, most of them wearing orange and blue, hoping for a shot to play the No. 1 overall seed tomorrow. But the Gators chances of mounting a serious comeback were wrecked in the second half, thanks to missed free throws and shots around the basket. At the 1:42 mark of overtime, the Gators were 5-22 from behind the arc.

On the other hand, Texas A&M came out with a strong game plan, which caused problems in the paint for Colin Castleton. The Aggies went on a 13-1 run towards the end of the second half, and then extended their lead to 15 points. Meanwhile, Tyree Appleby didn’t score against the Aggies, hurting any chance of helping his team today.

Mike White had this to say postgame about the play of Appleby.

“He has been really good, Bob, in our wins. I think he is fine physically. Just wasn’t his day. He is as down as anybody. Just struggled to get it going. Credit A&M’s defense.”

But all of this didn’t stop the Gators from going on a crazy comeback late in the second half, with Kowacie Reeves draining a 3-point shot with :12 seconds remaining. The Gators had come back from the dead, thanks to some missed FTs by the Aggies and bad shot selection. 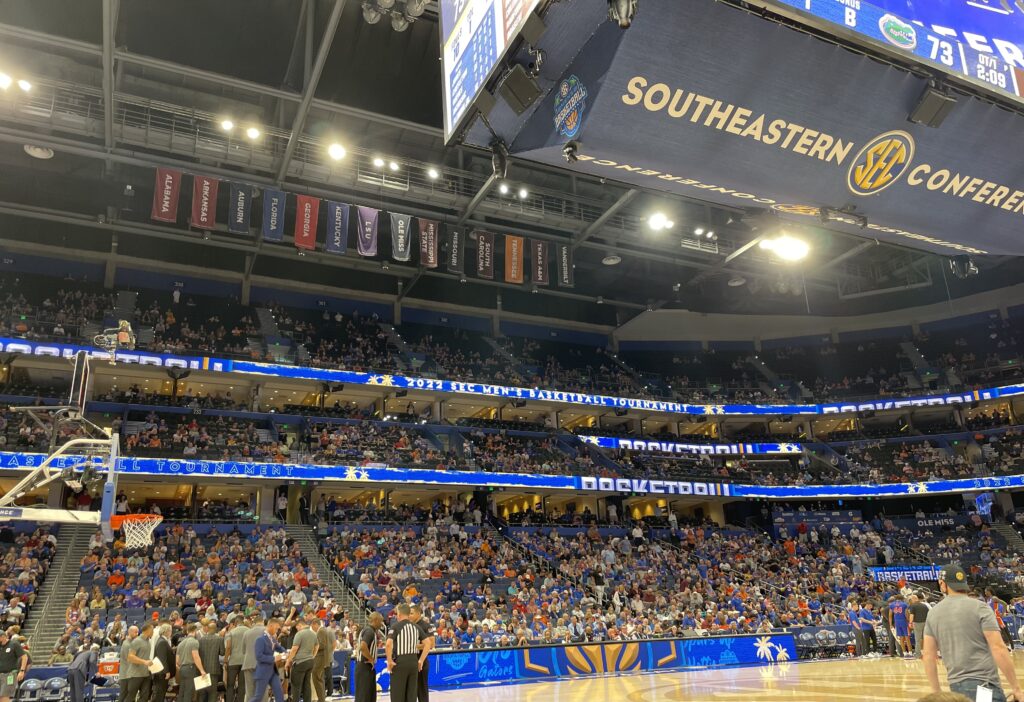 We headed to overtime and both teams battled along the boards and at the free throw line, while the Aggies took the final shot of the period. It was Hassan Diarra who hit the game winning 3-point shot and sent his team to the next round to play Auburn.

Hassan was asked after the game if he felt like this was a road-game environment, with a majority of the fans inside the arena today wearing Florida colors.

“Yeah, definitely. They had a very good crowd out there, a very good environment, so it definitely does feel like a road win. We even took the road game pic, so looking to post that soon.”

Texas A&M with the game-winning shot.

Now the next challenge that stands in the way of the Aggies are the No. 1 seeded Auburn Tigers. The two teams have only played once this season, with the Tigers winning 75-58 at home. The Aggies shot 13% from 3pt range that day, though they didn’t have a problem with that against Florida on Thursday.

Also in that first matchup at Auburn, the Aggies shot the ball 70 times, making only 19, which only added to the disappointing loss. One of the key areas where the Aggies looked comfortable was from behind the perimeter, so let’s see if that carries over to Friday.

Texas A&M held Tyree Appleby to 0 points in 20 minutes of play, while Niels lane scored 16 points for the Gators off the bench. Henry Coleman finished the game with 22 points, leading his team, while Quenton Jackson scored 14 points.

Either way, the Aggies came out on Thursday and made a statement to the biased Florida crowd, at least for one game. Now we will find out if this team learned anything from their previous matchup with the Tigers, which shouldn’t be very hard to scout for. We know what Auburn is going to do and where they will feed the ball.

The Aggies are going to have to decide on which player they’ll focus on, either Walker Kessler or Jabari Smith. I don’t trust the Tigers to be consistent from the three-point line, but they have so many other ways to score. So again, how Buzz Williams decides to play the Auburn guards will decide this game, potentially early.

Now we get to see how this team responds tomorrow after going through an emotionally draining game. The Tigers could be in for a battle if the Aggies team of the first half shows up tomorrow.

We will find out on Friday.