A raucous environment was on tap for the Vols and Wildcats on Saturday night, as we were given an offensive shootout that many wouldn’t have expected to end in the way it did, a 45-42 Tennessee victory. As the sold-out crowd welcomed both teams to the field, it was about to turn into a night both teams wouldn’t forget.

It didn’t take long for Tennessee to get on the scoreboard, Saturday night in Lexington. On the first play from scrimmage, Hendon Hooker hit Javonta Payton, and the Vols receiver took it 75 yards to the house. If coach Josh Heupel was looking for a fast start, his team wasn’t done yet in the first quarter. But, Kentucky had other things in mind when it came to game management, as they put together a 14-play, 75-yard touchdown drive, which took 8:38 off the clock.

It had become pretty obvious that Kentucky’s game plan would be to slow things down and run the football, which they succeeded at on the first drive. But, Tennessee’s gameplan was to speed things up, and score quickly. This plan was put to fruition again, as Hooker hit Velus Jones Jr. for the 72-yard touchdown, giving them a 14-7 lead. Hendon Hooker was 3-4 for 150 yards and 2 TDs. Vols had the ball for 37 seconds and led by a touchdown.

Tennessee head coach Josh Heupel discussed having 150 yards of offense through four plays and how it obviously impacted the game.

“I don’t know if we thought those four plays would gain that type of yardage. There’s some things that we thought we could take advantage of. Really high level of execution from guys without the ball in their hands, allow those big plays to happen. You know our third series has some big plays too and we end up fumbling the football. I thought up front, we saw, we recognize the block things extremely well. At times, you know, in particular on some pass protection, we got beat interiorly.”

As things started to sway in the way of Kentucky, the Vols would bounce back on the opposite end. It was awkward to see how long the Vols were on the field defensively at times tonight, especially when this squad would force the Cats into third down. But, the Vols and Wildcats continued to fight each other for the lead heading into halftime. The Vols put together a nice sixteen second drive to end the first half, as Chase McGrath nailed a 43-yard FG to give them a 24-21 lead.

It’s one thing to see Tennessee move this fast on offense, but it’s another thing to see them leave their defense in certain predicaments. Josh Heupel was hell bent on getting his offense into the end zone as quick as possible, leaving the defensive unit gasping at times.

But this would end up hurting the Vols for most of the night, as Kentucky kept extending drives and rushing the ball outside the pocket. The Tennessee defensive unit had problems for most of the evening, which anyone would if they were on the field as long as the Vols tonight. At the end of the game, Kentucky had ran 99 plays, compared to 47 from Tennessee. The obvious negatives to this situation is the Vols defense being on the field that often, but Josh Heupel was proud of his unit for getting the stops needed in the 4th quarter.

“I think just the competitive nature. Their competitive composure, too. Their demeanor, whether something positive or negative happened on the previous drive, their ability to come back over and just kind of reset. Something we talked about; you try to train. But man, for them to do it in this moment against a really good football team on the road speaks to who they are and what they are becoming as a unit. I’m really proud of the way they finished the ball game. Rather not give up the fourth and extra-long right there, but I love their ability to reset and go finish it the next four plays.”

A good football team on the road speaks to who they are and what they are becoming as a unit. I’m really proud of the way they finished the ball game. Rather not give up the fourth and extra-long right there, but I love their ability to reset and go finish it the next four plays.”

It was Velus Jones Jr. leading the Vols in receiving, with 100 yards on 5 receptions and 1 touchdown. 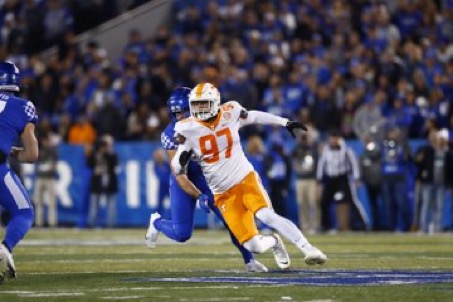 You take a hard look at the Kentucky offense, which had three scoring drives in the first half and I don’t know how you complain. Having over 220 yards rushing against any team is impressive, but the way the Wildcats handled each third down was impressive, until late in the game. The Wildcats finished the game going 1-4 on fourth down.

What we witnessed in the second half of this game was Kentucky playing bad enough on defense to let the Vols get away with their output.  Even when Kentucky would get close, like with 8:20 remaining in the game, the Vols offense would find a way to get it done. As the clock showed 9:36 remaining, Hendon Hooker went to work, as Jaylen Wright was ready for carries as well. The Vols came up short inside the red-zone, as Chase Macgrath missed the 35-yard field goal and the lead stayed at 45-42. It was a 12 play, 57-yard drive that ended with zero points and the Vols defense looking to hold on.

Even when we thought this game couldn’t get any crazier, Kentucky ran 99 plays, compared to Tennessee’s 47. This stat in itself is wild, but tack on the time of possession, with Kentucky controlling the clock 46:08 to 13:52, and we had ourselves a full blown shootout. Neither team wanted to play much defense, which ended up working out for the Vols.

Josh Heupel was asked about how the time of possession contrasted with the final score.

“I mean, the uniqueness of the game, the way it unfolded in just the beginning of the game. They had extended long drives. We scored extremely quickly on some big plays. And even when we didn’t, we moved the football down into plus Red Zone territory and ended up fumbling. It’s just really unique how the game really unfolded. I thought overall there are some things that we got to clean up, obviously defensively some third downs that we got get out from the field, quarterback draw hurt us. Obviously, the fourth and 26. Offensively there’s a couple of things. The fumble exchange and then a couple things in the red zone that we got to clean up.” 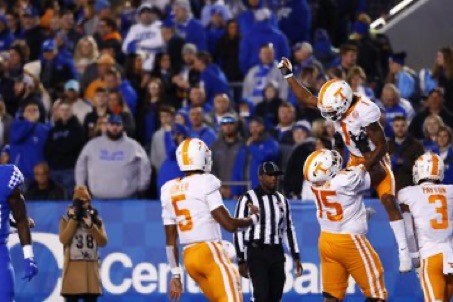 We witnessed Kentucky gain 612 yards of offense against Tennessee on Saturday night, but it would come down to the final possession. Even after giving up a 4th and 24 in the final minute, the Vols fought till the end, especially on the 4th and 10, on the Wildcats final play. It was the defense that stepped up and pressured Will Levis into a bad throw, giving the Vols the victory.

There is a lot you could say about this football game, but you can’t deny the fight in Tennessee, or even the Wildcats. Somebody had to win this game and the faster offense came through tonight. Even with Kentucky going 12-17 on third down and the Vols giving up 612 yards of offense, they still found a way. This Wildcats team has now lost three in a row, while the Vols are sitting pretty when it comes to potentially winning seven games.

You had a feeling this game would be crazy, but I didn’t expect it to come down to a wild 4th down stop for the Vols defense, especially after the night they had leading up to it.

One way or the other, Tennessee defeated #18 Kentucky tonight, as Josh Heupel picks up his first ranked win in Knoxville. Not a bad night for the team in orange, as they also snapped a 31-game losing streak against top-20 teams on the road.

The Vols continue trending in the right direction under Josh Heupel, with tonight being a great example of winning when things might not be in your favor. This Tennessee team is much more fun to watch than previous years, and they are winning as well.