TAMPA — As the fans started to pour into the arena on Sunday afternoon, a majority of them wearing orange, you had to wonder if this was the year Tennessee would end the SEC Tournament drought. It had been 43 years since the Vols held up the championship trophy, but that streak finally came to an end, as Tennessee defeated Texas A&M 65-50.

The stage was set for the Vols to finally cut down the SEC nets. Coming off the win over Kentucky on Saturday, Rick Barnes faced the same situation as he did in 2019 against Auburn. This time Tennessee finished the job, to the delight of Vol Nation, which has been waiting a long time to see this team dance in the confetti. It was presented as another challenge for this squad, which has been playing some of its best basketball, besides a few scoring droughts thrown in occasionally.

As the Vols drained three after three in the second half, you could feel the buzz around the arena beginning to rise after every shot. It never felt as though this team was in trouble, especially when Santiago Vescovi and Josiah-Jordan James continued knocking down shots. It just felt right, with everything this team has conquered this season, holding up the trophy was the right way for this squad to finish SEC play.

We’ve seen numerous times in the past where Tennessee would not hold up under the pressure, but not today, this was the Vols time to shine. After rushing out to a 14-0 lead to start the game, most imagined a blowout upcoming, but that had to wait until the second half. The Vols led 29-20 at halftime, thanks to 9 points from Kennedy Chandler. But it was the second half where the Vols took it to the next level. 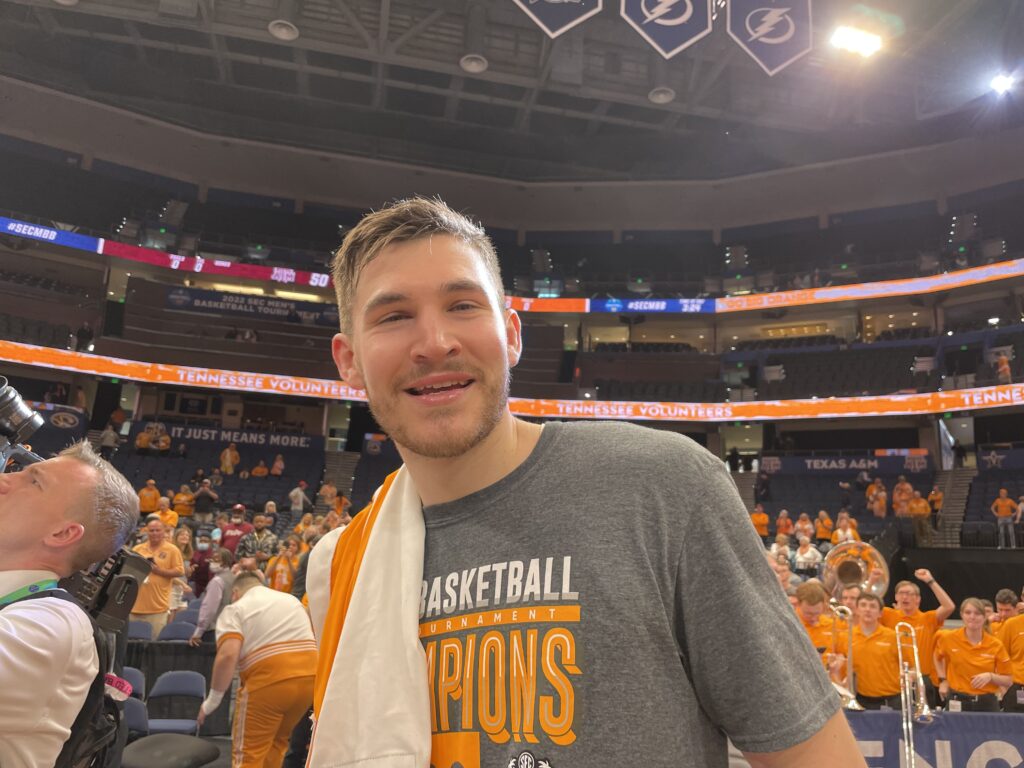 Thanks to Vescovi and Josiah-Jordan James, who combined for 20 points in the final 20 minutes, the Vols were up 16 points and staring down the barrel. Tennessee fans were gasping at every shot attempt taken, hoping the lead would be extended. The anticipation over the final three minutes of the game was almost addicting, with every basket being applauded and every whistle boo’d.

It was John Fulkerson who was battling in the paint and adding to his 11 rebounds at the 2:12 mark, knowing how close he was to finally securing a trophy that has alluded him for six years. The countless hours of work, six full seasons playing for one coach, espcially being an East Tennessee native, you know how much this meant to him. The crowd would add a bit more juice to every cheer after a play he was involved in. He had earned this and wasn’t going to let one second go by without soaking it in. 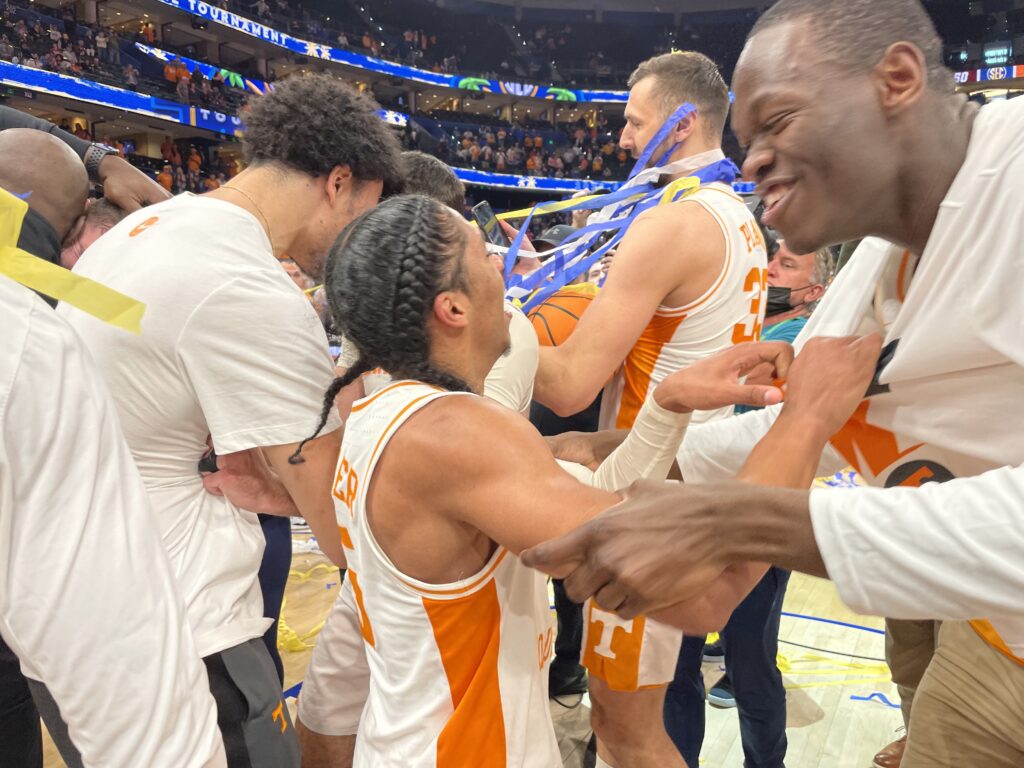 This team had to turn into the ‘Heel’ to get the job done over the last two months of the season. You’ll never see these players labeled as bad guys off the court, but on the court the persona needed to change. They had to become the Villain for forty minutes, playing with a level of swagger and tenacity we haven’t seen in Knoxville for a while.

The final seconds ran off the clock at John Fulkerson headed straight for his teammates, embracing them with a hug that’s been built up for so many years. He yelled out, ‘We did it, we finally did it’ walking around the court. As he was making his way to the celebration platform, he broke down and started to cry uncontrollably, knowing how much this moment meant to him and the work he’s put in.

It was a wild celebration with Kennedy Chandler named MVP, surrounded by his teammates jumping on him and accepting the award. If it weren’t for a player like Chandler, who knows how far this team goes.

But as I watched this team come together on the court for a dance party, I realized how much how work they had put in this moment. they knew the stigma around this team and the drought, it wasn’t lost on them. But on this day, they could put that all behind them and cut down the nets in Tampa.

Before walking away from the basket, Josiah-Jordan James looked over and said ‘We’ve got more nets to cut down’. Sounds like the Vols aren’t done yet.