Who knew what to really expect when it came to what type of fan support would be waiting for them as they hit the court. Turns out, a whole bunch of Tennessee fans made the trip to watch the Vols defeat Mississippi State 76-69 on Friday night. With a session in the same bracket as Kentucky, it was easy to ask this question. But thanks in part to a raucous crowd, the Vols will have a good showing on Saturday afternoon.

We questioned how the Vols would deal with a physical team like the Bulldogs, and for 25 minutes that question was relevant, up until Josiah-Jordan James started knocking down three-point shots in the second half. We’ll get back to that. This team came out playing sloppy on defense, not taking advantage of the mistakes the bulldogs were making, especially around the basket. Tennessee held an 8-point lead in the first half, thanks to Kennedy Chandler, before Mississippi State cut it to 39-37 at halftime. 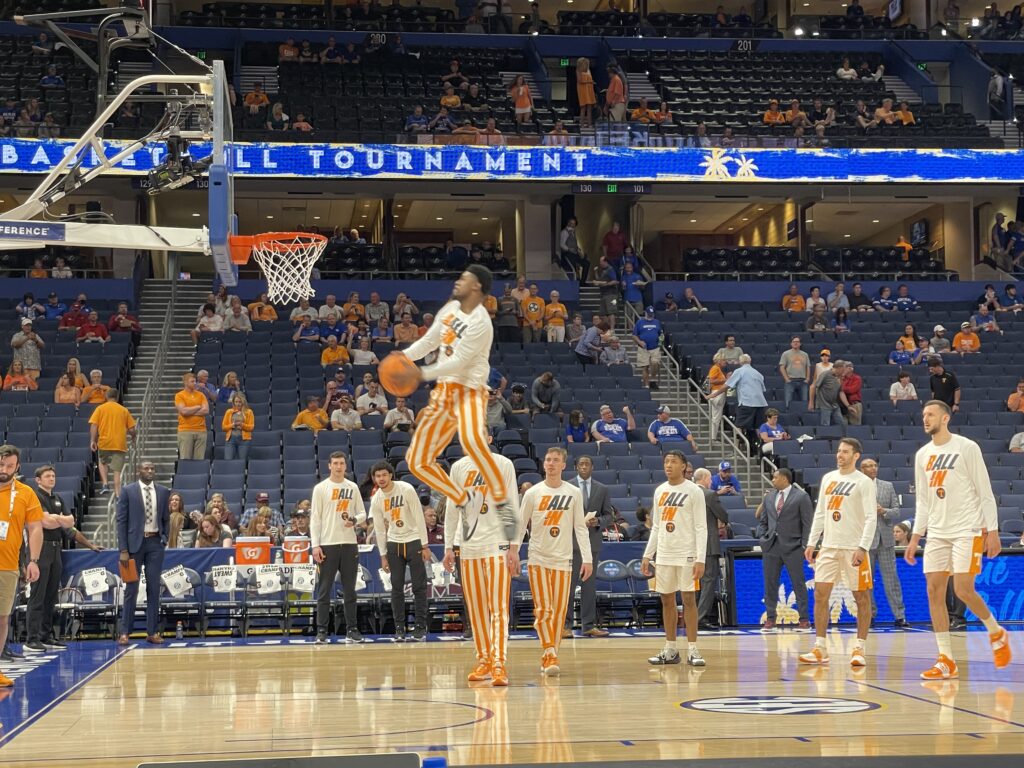 The Vols were relying on Kennedy Chandler, as he poured in nine first-half points, followed by Santiago Vescovi who had seven. What was causing them problems was the constant pressure Iverson Molinar was causing around the basket, scoring nine first-half points. Thanks to Shakeel Moore, the Bulldogs were able to keep it close, especially shooting 56% from the field as a team over the first half. This was exactly how the Bulldogs wanted to play the Vols, keeping them tight and not able to explode around the basket.

Having Brandon Huntley-Hatfield contribute at the rim, not only on defense, but scoring 10 points on the night was huge for the Vols rotation, especially playing with John Fulkerson.

“When he wants to play physical and when he is playing at his best and imposing his will, I mean, it’s really hard to stop him,” Josiah-Jordan James said. “I know firsthand because I have to guard him.”

But what were once problems in the first half, turned into the nail in the coffin for the Bulldogs in the second half. The Vols opened the half with 12 straight points from Josiah-Jordan James, on 4 straight three-pointers. This sent the crowd wearing orange into a frenzy, also keeping State at arms length. There’s not much you can do when a player gets that hot, that quick. James had 14 points by the 13:09 mark in the second half. 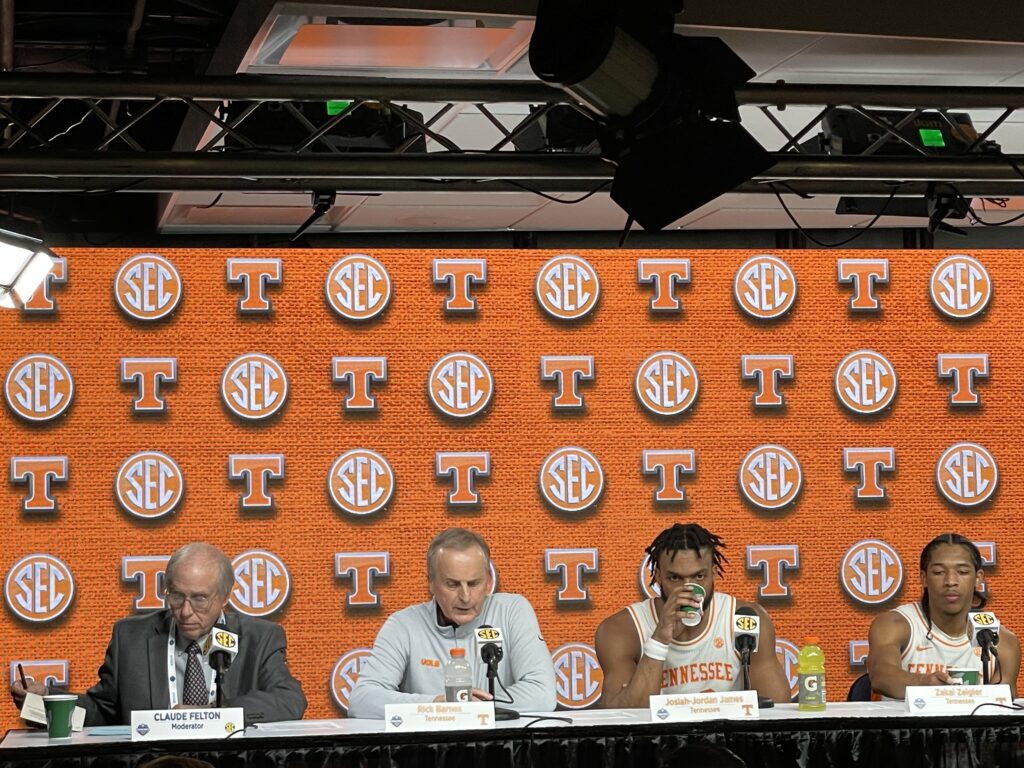 Tennessee ended up having five players in double-digit scoring, which Rick Barnes said that this team is at its best when they have balance, which they will definitely need tomorrow.

“Well, we’re at our best when we have that balance, but we also — I think our guys have learned tonight when a guy has it going, to get to him. And I thought they did a really good job of that with Joe. We had a couple — and, you know, Mississippi State was pushing us into deeper possessions.

“We were going to have to continue to move, but we did. Tonight I thought we did do a better job of putting the ball on time and right in the shooting pocket,” Barnes added. “I mean, that’s something we talked about all year, delivering the ball when it needed to be delivered and letting guys get set up before we give it to them too soon. When we’re playing our best, yeah, we’re playing with great balance.”

They did all of this despite Kennedy Chandler exiting the game a few times with an ankle injury, though he was still playing with 4:00 to go, alongside Zakai Zeigler. During the postgame presser, teammates were confident that Chandler was fine and would be ready to go on Saturday. But, Zakai Zeigler always seems ready to go, especially Friday night. He has only practiced for 10 minutes since the Arkansas game, according to Rick Barnes.

Barnes spoke about Kennedy Chandler, saying he has trust in the training staff and the word of Chandler.

“I think it’s hared this time of year if you don’t keep your reps. In Kennedy’s situation, I said to him, if I see you limping, you’re coming out of the game. He said I’m not limping. I said I think you are limping. He said I got kicked or something. I said is it the ankle? He said, no. I was kidding with him back there. Is it up to him? I said to him, how do you feel? He said, I’m fine. We have to trust him on that.”

The five on the court at the end are usually who Rick Barnes trusts the most and this was the same five we’ve seen for the better part of the season. If it weren’t Josiah-Jordan James, who knows what this game would’ve looked like, but his quick spurt set the tone.

“Yeah, I was a little cold. I got stretched during halftime, but those are shots that I practice, and so I just trust my work, trust my teammates, and credit to them. Uros and Brandon were screening to get me open.

“Zakai, Kennedy and Santi were passing and putting it on the money,” James added. “All the shots felt good, but credit to my teammates.”

Now that the Bulldogs are in the rear-view mirror, the focus turns toward either Kentucky or Vanderbilt, both teams the Vols have beaten this season.