If you thought you were going to be able to turn the channel in the second quarter of the Tennessee vs Alabama game, the Vols had other plans for you tonight.. Turns out, the defensive unit came to play in the first three quarters of this game, but unfortunately tiring out towards the end. After making folks inside the stadium sweat, on this cool night, the Tide finally pulled away after a lot of resistance from the Vols, winning 52-24.

This turned out to be one of those games where the opposing team hung around for a good amount of the game, because of their overall effort. You all witnessed that performance from the Tennessee defense on Saturday night, at least for three quarters. There comes a time where every team is going to give in to the ongoing pressure and field time, which came at the end of the third quarter for the Vols defense. Multiple times on Saturday night, the Vols defense gave up a pivotal third downs, leaving them on the field and gasping for air. What would you expect if Alabama ran a total of 92 plays, to Tennessee’s 54.

Tennessee found themselves with a perfect opportunity to make the crowd inside Bryant Denny Stadium start to question things. Deshawn Rucker broke through the Alabama special teams unit and blocked the punt, giving Tennessee the ball at the Alabama 16-yard line. But, the Vols didn’t make the Tide pay, settling for a 32-yard field goal. The Vols had a chance to tie it up, but Alabama still led, 21-17.

If you watched this Tim Banks-led defense for most of the night, it wasn’t hard to figure out what they were trying to accomplish. The Vols were playing 2-high safeties for most of the game, keep everything in front of them. This strategy seemed to work for a good portion of the game, even as Tennessee led 14-7 after the first quarter. But the Vols gave up way to many scrambles by Bryce Young, extending drives and leaving the Tennessee defense on the field.

The Alabama defense started settling in after the first quarter, forcing four consecutive punts by the Tennessee offense. It never felt as if Hendon Hooker was a threat on the ground tonight for the Vols, as he missed multiple opportunities to pickup first downs with his legs. It was pass mode all evening, even when Alabama was giving up running lanes, Hooker was hesitant at times to take off. It didn’t help that the Vols offensive line struggled, as the team only rushed for 64 yards.

Josh Heupel discussed the play of his banged-up quarterback Hendon Hooker, who finished the game 19-28 for 282 yards and 3 TD’s, with one interception.

“I thought Hendon battled all night long. I thought he was really efficient for the most part during the football game. Some of the early drives we got stopped in short-yardage situations where the ball wasn’t necessarily in his hands. I thought he continued to fight and play in the second half. Had some big-time plays. Didn’t get enough going in the run game during the course of the early part of the game. And that’s a big part of why the game played out the way that it did. On that play in particular (the interception), those guys were just on different pages there.”

Alabama threw the football 43 times tonight, gaining over 523 total yards by the 8:51 mark in the 4th quarter. This was a performance from the Tide where they just shutdown the Vols at certain times where the game could’ve changed. Even at the 8:51 mark, it felt as if this thing had gotten out of control. just by the stat sheet, where Alabama had thirty first downs, compared to nine from Tennessee.

You have to look at this game from multiple different angles. One, Alabama can control the clock and possessions, just by having Bryce Young scramble. The 42 yards that Young had on the ground tonight were a clutch at times, giving them perfect opportunities to pick up the first down scramble out of trouble. The other point would be how Tennessee forced Young outside the pocket, causing pressure along the defensive line for a good chunk of the night. The Vols simply didn’t do a good enough job of tackling tonight. 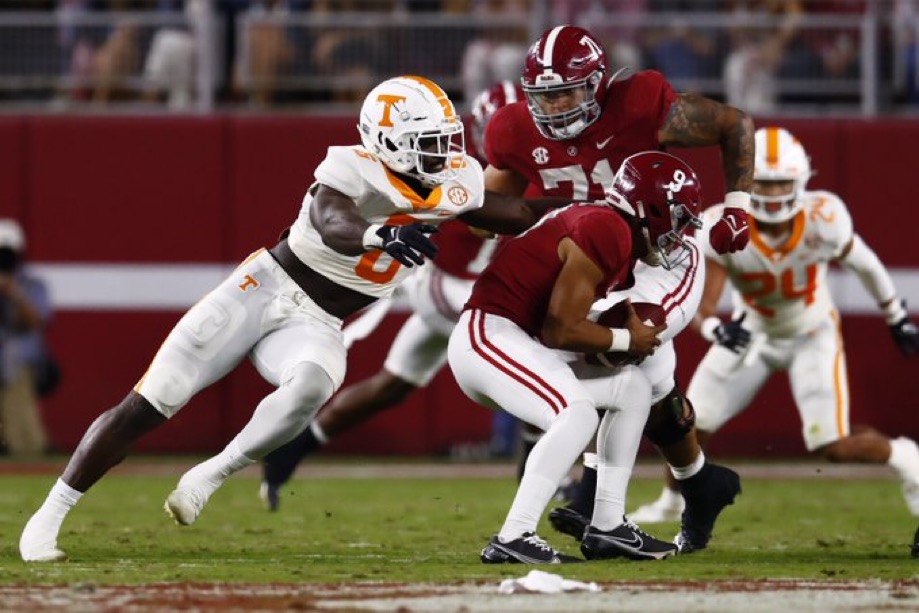 Tonight certainly felt like we were watching a Tennessee team that was on the rise, but just fell into certain traps during the game that caused them to overthink some situations. Josh Heupel pointed out how fun this game was for three quarters, but they must continue to grow and be smarter in certain situations.

“So there are ways that we have to grow. That’s what I said in the locker room to this football team. Don’t question the way they show up and compete every Saturday. Love that about this group. Love going and competing with them, man. Tonight was a lot of fun for three quarters with these guys. We just have to grow up and be smarter. Our margins are smaller and tighter than you want. They know that. We know that. We have to fight to be on the right side of that.”

I didn’t understand some of the 3rd down calls, especially having Jabari Small try to pick up three yards. The Vols were 2-13 on third down tonight, not giving the defense much of a break. You won’t win many games with that kind of stat, which proved to be true tonight. Still, Tennessee was somehow hanging tough.

At the 14:30 mark of the 4th quarter, Hendon Hooker hit Cedric Tillman down the sideline for the 70-yard touchdown, making it 31-24 Tide. The Vols were still in this game, given all the mess they had dealt with on the offensive side of the ball. But, unfortunately, that would be the only touchdown they scored, since the 1st quarter. Tillman finished the night with a career high 7 catches, for 152 yards, giving Tennessee life to start the 4th quarter.

Following the game, Nick Saban discussed the win and talked about the corrections that need to be made, especially in the defensive backfield.

“We did some things that we need to get fixed obviously. Lost a couple coverages on defense, fumbled the ball at the nine-yard line, got a punt blocked, roughed the punter on 4th and 30. Just some things that we shot ourselves in the foot with. I think those things really need to get corrected, or they’re going to cost us at some point.”

“I told the players they have a bye week coming up”, Saban added. “We have a real team we have to play in two weeks. We need to get some rest. We need to recover, but we also need to focus on what we need to do to finish the season and get some of these things corrected.

The Alabama offense did a fantastic job of spreading out the Vols defense, all night. It felt close in the early 4th, but Alabama showed how hard a punch they could throw, especially making it 52-24 in the late fourth quarter. The Tide scored on their final five drives of the game, putting Tennessee away, even as the Vols looked to still be fighting.

At the 1:40 mark in the 2nd quarter, Alabama punted for the first time, following it up with two more punts. This was the time where Tennessee could’ve made things interesting, but the Vols simply shot themselves in the foot too many times.

The Vols could only muster ten points, and left their defense on the field way too much in the second half. Josh Heupel discussed the second half, mentioning his team had a shot in the final thirty minutes, but couldn’t get the stops it needed in the 4th quarter.

“Disappointed with the outcome of the football game. Obviously, I felt like going into the fourth quarter we had an opportunity to compete and find a way to win the football game. I’m proud of the effort and strength that our guys played with all night long. We just didn’t play smart enough, in particular on the offensive side of the ball.”

Simply put, the defense ran out of gas in the second half, especially not getting Alabama off the field on third down.

For 3 and 1/2 quarters, I thought Tennessee might have a chance at keeping this within one possession, even as their defense was gassing out. Turns out, Alabama is pretty darn good at putting their foot on your throat and making you pay for multiple mistakes.

Tonight, the Vols showed up for a fight, but the Tide had way too much in that punch.