The SEC released the 2022 football schedule on Tuesday night, in a pretty long television show that could’ve been saved by a few tweets, but oh well. There was one team that was missing from Tennessee’s non-conference schedule.

The university has been working on a deal to get rid of the game with Army for quite some time now, dating back to the previous administration. It was announced on Tuesday night that Akron will be replacing the Black Knights, as part of an agreement reached by the school. 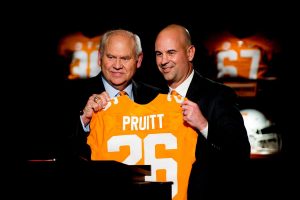 Tennessee was supposed to pay Army $1.4 million to travel down to Knoxville, according to a previous agreement signed. But after work started by the previous staff, the Vols will now pay Army $500,000 to get out of the game. Tennessee then started working on finding a team to fill the void left by this decision. It was announced that Akron will now play Tennessee next season in Knoxville and the university will owe them $1,000,000 for the contest.

The Volunteers also announced the remainder of their 2022 schedule. They will open the season with Ball State, before traveling to Pittsburgh for the return trip. In an interesting twist to the schedule, Tennessee will play Florida, at LSU and then at home against Alabama. There is a “bye” week in between the Gators and Tigers.

The Vols will then play UT Martin, Kentucky, at Georgia, Missouri, at South Carolina and then wrap the season up at Vanderbilt.