A wild ending in Knoxville will turn out to be the story that comes out of this game, as the game had to be halted due to a hail of trash being thrown on the field. Unfortunately, even though Tennessee played a great game, especially being banged up on offense, it won’t be what folks remember most about this football game.

As I made my way down to the field for the final five minutes, which is our standard time as media members to get on the field, I couldn’t imagine what I was about to witness. As Tennessee was attempting to pickup a first down, on 4th and forever, Hendon Hooker connected with Jacob Warren down the middle of the field. I couldn’t tell if he picked up the first down, but looking at the replay, it was extremely close. The referees went to review the play and determined that Warren did not reach the first down line, which is when craziness began.

As I was making my way around to different spots in the stadium, I found myself in the south end zone area, listening to the crowd give it to the officials, which was occurring because of a night filled with questionable calls. This is when things took a turn, as objects started flying down from the student section and lower area of end zone. I’ve seen plenty of these type of situations happen in sports, mainly in international soccer, but I’ve never experienced it in-person. So, I tried to get a little closer to the chaos, which wasn’t the smartest decision on my part. I then found myself watching Lane Kiffin pickup a golf ball that was thrown from somewhere in the vicinity of the student section. Then, the water bottles, mustard container, mini-bottles and more were thrown on the field, which caused a 20-minute delay in action, as security tried to get ahold of the situation. 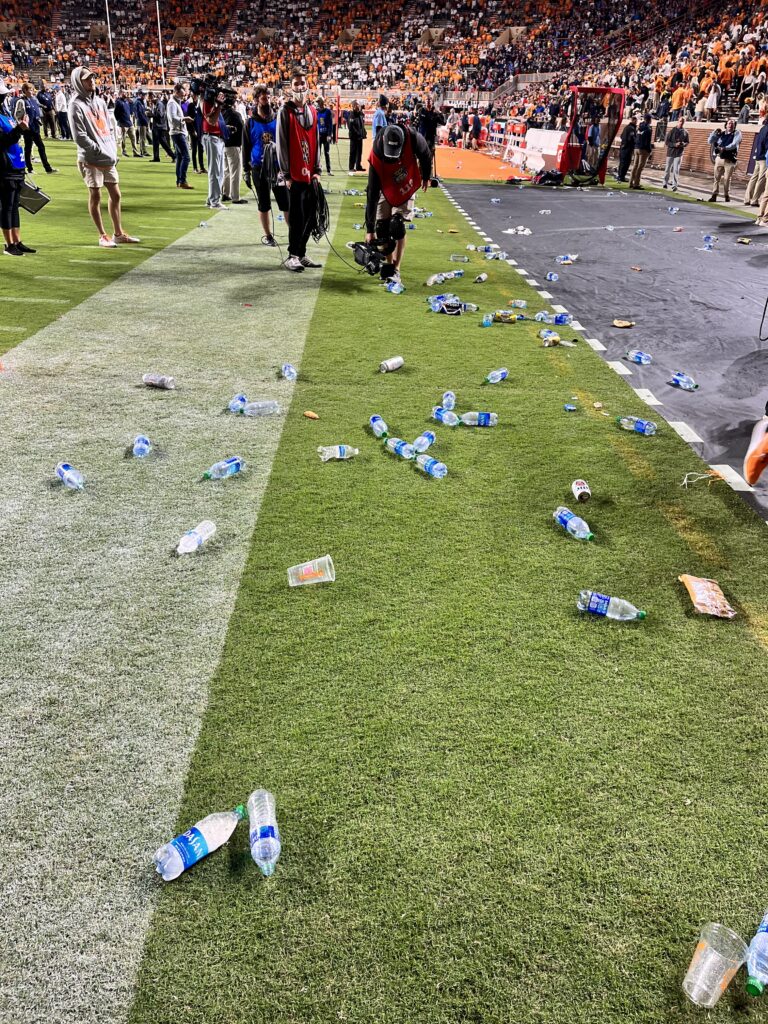 To say it was a little wild would be an understatement, as I was watching the Tennessee marching being unintentionally pelted with anything some fans could get ahold of. Running right past me were cheerleaders covering themselves with the signs they hold up during the game, and all I kept thinking to myself was how insane this makes some fans look. Seeing the police setup a wall around Lane Kiffin was something I wasn’t expecting, but I guess having a golf ball thrown at you will do that. This wasn’t normal, by any stretch. I caught eyes with a security official as things started to get hairy, and his eyes told the story.

As security officials and police tried to figure out what to do, they informed the Ole Miss players to get away from the bench area, as they were jawing back and forth with Tennessee fans, as items were being thrown their way. How the hell was this going on and why did it take so long to get it under control? Look, the simple fact is that this type of stuff shouldn’t be happening at sporting events, because all it took was one drunk student to come on the field and things could’ve escalated further. Tennessee officials did a great job of watching over the Ole Miss players and coaches during this time period, as Lane Kiffin showed off his new keepsake to his colleagues.

During this time period, Tennessee officials thought it would be a good idea to remove the cheerleaders and marching band from the stands, as they were still being unintentionally pelted with items thrown from around them. In all my days covering this game, I don’t think I’ve ever seen the home team band having to be escorted out of the stadium, for their own safety. It was a weird scene that felt like lasted longer than 20 minutes.

In my opinion, it was a culmination of what a few Tennessee fans thought was bad officiating throughout the night, which could be traced back to the Matt Corral fumble in the first half. I definitely didn’t disagree with fans being upset with that call, because it was horrendous. But this turned out to be pretty stupid way for the few fans to express their feelings.

Tennessee Chancellor Donde Plowman released a statement after the game, calling out the fans that caused the delay in action.

“I am astonished and sickened by the behavior of some Vol fans at the end of tonight’s game. Good sportsmanship must be part of who we are as Volunteers. Behavior that puts student athletes, coaches, visitors, and other fans at risk is not something we will tolerate. I will be calling Chancellor Bryce in the morning to offer my apology on behalf of the University of Tennessee and discuss what we can do to make this right. Neyland Stadium has always been a place for families, and we will keep it that way.”

All week, Josh Heupel asked the fans to turn Neyland Stadium into a “Hostile Environment”, that his players could feed off of and make the lives of Ole Miss players even more difficult than a regular away game. He wanted this stadium loud and on fans on their feet for sixty minutes, which he got for almost five hours. But when Heupel was asking for that type of environment, he didn’t actually mean that type of “Hostile Environment”.

I know folks will look at the score and see how close a game this was, but the story isn’t what happened while the game clock was rolling, the story is how some drunk fans might’ve taken his advice to the extreme and caused Tennessee to look foolish in the process. Tonight should’ve been about this Tennessee football team taking the next step towards relevancy. Now, everyone is talking trash, about the trash that was thrown on the field.

As Lane Kiffin was strolling off the field postgame, I watched him salute the Tennessee fans still in the south end zone. Seems pretty fitting that he left Knoxville years ago with trash on the streets and he’s leaving again with trash on the field.