KNOXVILLE — Tennessee has been in the trenches over the last decade, fighting to get back to the prominent football program it once was. The path to relevance has taken many twists and turns, including a regime change just over a year ago. But if you’re a fan of the team in orange, you should take solace knowing the program is working to get back into the picture.

Just last spring, Josh Heupel entered his first year at the helm in Knoxville, having to deal with NCAA problems and low spirits around the locker room. Now as he enters his second spring practice as head coach of the Vols, things inside the program seem to be moving in the right direction. There is cohesion within the athletic department and the administration building, something that was missing in the final year of the Jeremy Pruitt era. All parties are working towards a common goal, not just passing around different ideas like a bad habit.

The 2021 season was successful, which has given players, staff, and fans alike a reason for optimism for 2022. And there’s no better sign of that shared optimism than the ongoing construction to Neyland Stadium and the Anderson training facility. The school is clearly fully invested in the long-term success of the football program.

Tennessee Chancellor, Donde Plowman recently mentioned to me how far behind the program had gotten in terms of facility upgrades that keep pace with other prominent schools. Plowman felt as though UT had stood still, while other football programs continued to push forward. Many around the athletic department share this feeling, which is why the school has invested in these upgrades that should pay off long term. Josh Heupel also talked about the ongoing renovations on Tuesday, as he met with the media for the first time this spring. He made it very clear that showing off Knoxville must be a top priority for attracting recruits who will then bring along future success.

“It’s an exciting time to be here with great energy and momentum in this building. (Recruits) are able to see and feel the energy and connection that we have. It’s been a huge part of what we’re doing and where we’re going.”

Heupel wants Knoxville to be a premier destination for recruits, and the Vols took a major step in that direction on Monday when 5-star QB Nico Lamaleava committed to Tennessee, giving them their highest prospect in almost two decades. That high-profile player commit sent shockwaves around the college football world on Tuesday. I know it’s just one player and this staff has to continue finding future stars, but his commitment let other schools know that Tennessee isn’t content to play second fiddle anymore. They are coming for the best, and they have the resources to do it, especially in this new era of Name, Image and Likeness. 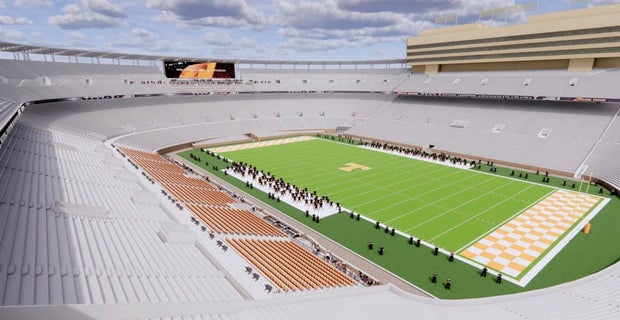 But it’s not just what the Vols are doing off the field that has caught the eye of many. The return of Hendon Hooker has also played a key role. Having a starting quarterback who’s already familiar with the system will be a big help, come the first game of the season. They just have to surround him with other talent to further his success at Tennessee. Cedric Tillman at wide receiver and Jabari Small at running back are two key pieces. We all know the defense has work to do, but putting together a formidable, multi-faceted offense that works well together will be a big asset come fall.

So, we sit here at the beginning of spring practice in Knoxville, and the football team will hit the field fourteen more times before summer workouts begin. The mood has shifted around the program. Donors and other people associated with the athletic department can feel it. The ongoing recruiting cycle should be very good for the staff, whose work towards this 2023 class has already paid dividends.

But there is an extra pep in the step of people surrounding the football team, knowing the future can be bright if they all continue working together for one common goal. It’s not going to change overnight or even in the next two years, but the train is back on the track and headed in the right direction. Entering Year Two of leading this program, Josh Heupel must make sure that it doesn’t come off the rails.

I don’t see that being a problem. It’s not like we are dealing with the ineptitude of the previous regime in Knoxville, one that couldn’t figure out how to put one foot in front of the other without falling. There are leaders on this campus now who want to return the Vols to a place of prominence in college football.

It will take a bit of patience, but Tennessee fans are already used to that. The difference this time is that there is a much better chance that such patience will be rewarded.