Knoxville, TN – The NCAA Tournament has already brought us numerous intense games around the country, but Sunday night in Knoxville presented another challenge for Tennessee. A hostile, sold-out crowd witnessed the Vols make a tremendous comeback in the ninth inning, scoring six runs and holding Georgia Tech for the 9-6 win. 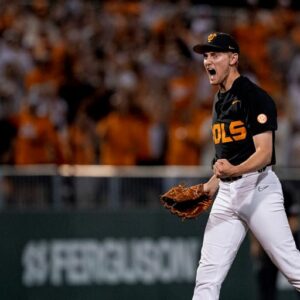 For the first time in program history, Tennessee will head back to the Super Regionals in consecutive years, hosting Notre Dame next weekend in Knoxville. It didn’t go according to plan for this Tony Vitello led team, but Tennessee has shown multiple times this season, including Sunday night, that they are able to explode on offense at any given time.

After defeating Campbell earlier in the day, the Yellow Jackets took the field just under two hours later looking to pull off the upset. It was Zach Maxwell taking the mound for Georgia Tech, who hadn’t started a game in over two months. Turns out that wasn’t a problem for the 6’6 pitcher, who threw six innings, recording 11 strikeouts and going up 5 hits. It was a fantastic performance for the starting pitcher, giving his team a 4-0 lead, that they ultimately couldn’t hold onto.

Roaming around the stadium on Sunday night, the nervous energy could be felt in every section I visited. This season has brought many thunderous moments for the capacity crowd that fills the stadium on a weekly basis, but this weekend felt different. Tennessee fans came into the weekend expecting to watch their team to win, not just hoping. That seems to be the difference this squad has brought this season, compared to years past. Standing in the left field porch area with a group of folks having a few cocktails while chomping down on some food, the overall sentiment was that this group would find a way to win, something they’ve down 56 times already this season.

“Yea I am freakin’ nervous, but we’ll find a way to win, just watch,” one fan said to me as the game entered the ninth inning.

Well, he wasn’t wrong, as I stood next to a group that started to lose their minds as Tennessee tied the game off a Jordan Beck double. We had seem this same situation play out on Saturday night, with Campbell taking a 4-0 lead early in the game, only to see the Vols fight their way back and win 12-7.

Earlier in the night, once Georgia Tech took the 4-0 lead, I was standing next to a couple who were standing behind the student section area along the right field line. The beers were being drank at a pretty impressive rate, as I spoke with Chuck from Cleveland, Tennessee. He had driven up to Knoxville earlier in the day, paying $250 bucks for two tickets to a game he said they weren’t going to miss. He didn’t think twice about the price of the tickets, he just wanted to experience the environment with his wife.

“Man, look around at this place, you’ve been around here for a while now, have you ever seen this type of excitement for a baseball team? This is just awesome man, we couldn’t come last night, so I wasn’t missing this one.”

I couldn’t argue with him on that one, as he took down his 3rd beverage during our twenty minute conversation. The attraction to this team is brought upon for multiple reasons, mainly being that this group plays with a type of confidence that most certainly is unattractive to opposing fan bases. The swagger which they play with is something that stood out to Chuck, as he explained to me after the Vols put up two runs in the 5th inning.

“Look, we’re the number one team in the country and I don’t care how they act on the field as long as they continue to win. These are damn 19-21 year old kids, who cares if they talk shit while they round the bases or make a big play. They are winning and there’s not a damn thing wrong with playing with some swag.”

For all the years that Tennessee fans have had to put up with subpar performances from the teams they cheer on, I understand why this group of fans are embracing every moment of this year’s run. But as numerous people pointed out to me this weekend, it’s also about how the players feed off the crowd and environment. The baseball program has done a fantastic job of letting the fans get to know these players, whether it be through weekly interviews that they conduct or Tony Vitello agreeing to do interviews outside of a press conference setting. 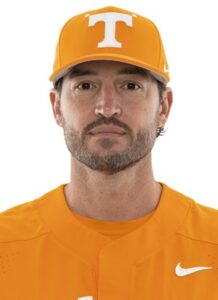 Tony Vitello had this to say about the environment inside Lindsey Nelson Stadium on Sunday night. ‘

“I do know that that crowd, and I say it all the time, but that was loud. I mean that was like thunder in the ninth inning. So we appreciate that, obviously they are reacting to what the kids are doing, but that was fun. So hopefully they all celebrate safely and come back next weekend.”

The head coach of a power-five baseball program goes on an afternoon show weekly called ‘The Drive’ with Russell Smith and ‘Bear’, ending every interview with a segment called ‘Jam or No Jam’, where the producers plays five musical tracks and Vitello gives his opinion on the song. He sometimes conducts these interviews while on the field during a practice or on a bus ride to an opponent’s town.

It’s all about marketing, along with winning, but you get the point. The SID, Sean Barrows, has done a great job of getting his coach’s voice out to the public, and in return gets fans involved in the program. This is part of the job that brings in more followers, getting people that want to invest their money and time into a program that was struggling to fill seats just four years ago.

The baseball program has become the hottest ticket in town and this is a big part of the reason why the school is investing over $50 Million for stadium renovations in the coming years.

So, as Tennessee entered the ninth inning, trailing 4-3, the fans that stuck around waiting for the big moment were given anther reason to believe this squad can win it all. Thanks to Jordan Beck tying the game with a double and Christian Moore giving the Vols the lead with a 2-run single, fans were trading hugs and high fives as their team did it again.

As I walked around the concourse, taking in the atmosphere and watching folks celebrate after the game, I overheard one fan sum up the night in a perfect way.

“This damn team is gonna give me a heart attack, but man that was fun.”

Hopefully that man takes it easy this week because there’s a good chance that next weekend’s  Super Regional against Notre Dame will get even crazier.