KNOXVILLE, Tenn. — In front of a sellout crowd in Knoxville on Tuesday night, Tennessee and Kentucky squared off in a much anticipated rematch. Just like the previous matchup, one team came out throwing haymakers and the other couldn’t recover. Tennessee came into this game looking for revenge, and they got it in a big way, beating Kentucky 76-63.

Tennessee won their 8th straight SEC game and picked up their first win over a top 5 team since 2019. Kentucky came into the game ranked 4th in the nation. They were living up to the billing until they ran into the Tennessee buzzsaw. 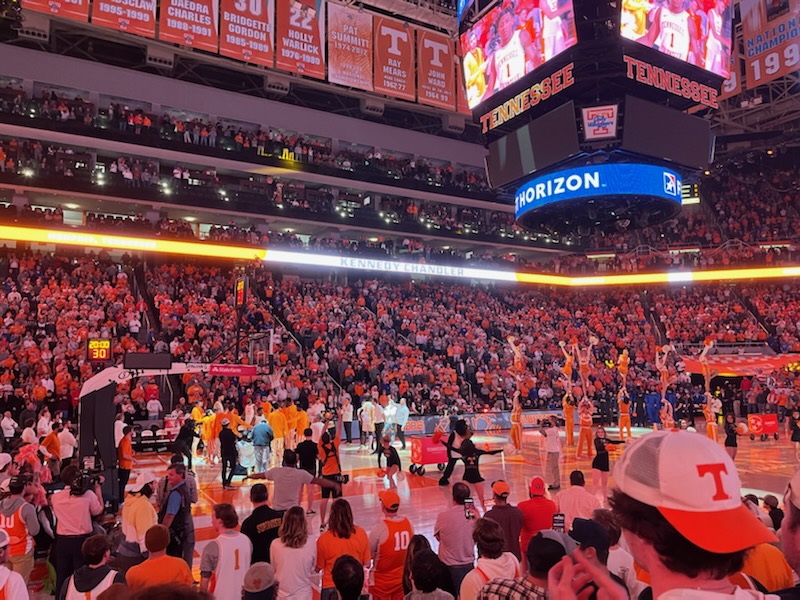 It was almost as though the basketball gods had this planned from the beginning. Kentucky won the first meeting by 28 points, putting a sour taste in the Vols’ mouth. Zakai Zeigler said he had never felt that bad after a basketball game as he did when he walked off the court in Lexington. But on Tuesday night in Knoxville, the raucous student section started lining up to get into the game more than four hours before the tip, and the Vols paid them back by putting on a show inside the arena, lighting up the scoreboard with massive shots.

“I know I’m biased, but I don’t know how environments get better than [Thompson-Boling Arena]. People talk about the blue bloods a lot, but the orange bloods are right there,” Rick Barnes said about the environment on Tuesday.

Kentucky’s John Calipari picked up a technical foul just three minutes into the game, creating a crazy environment that didn’t need the extra motivation. Then the game really seemed to turn when a scrum broke out on the Kentucky bench area after John Fulkerson came crashing in after a rebound.

Zeigler was given a technical foul for the dustup on the bench with a Kentucky trainer during this moment. Barnes was frustrated that his player was given a personal foul, but nothing happened to the trainer who got involved with Zeigler.

“I don’t know how that’s fair. Zakai gets a personal foul, too, but what about Kentucky’s trainer? How’s that a good rule? I told Doug [Shows] we need to discuss that in the offseason.”

After the foul call to Zeigler, his teammate Chandler went on a quick spurt. Chandler had 11 points at the 10:25 mark of the first half to spark a 17-1 run from the Vols. Tennessee held Kentucky scoreless from the field for over ten minutes, forcing multiple turnovers in the process. If it weren’t for free throws made by the Wildcats, the halftime score of 46-32 could’ve been much worse.

The Vols had four players in double-digit scoring on Tuesday, led by Santiago Vescovi’s 18 points and Chandler’s 17. But if it weren’t for the defense of Zeigler and the post presence of Fulkerson, it could’ve been higher. Zeigler finished with 14 points, often bringing the crowd to their feet with a huge basket or a defensive stop.

Barnes was proud of the way his team played defense tonight.

“We were much better defensively tonight. Much more sound on our possessions… We didn’t have a lot of breakdowns tonight… I think that everyone that came in the game made a major contribution.”

Another player who had a nice game for Tennessee tonight was freshman Jonas Aidoo, who finished with 5 points and seven rebounds, getting extended minutes and causing problems around the basket.

“You have to earn it… and he has earned the right to be out there,” Barnes said about Aidoo.

For their part, the Wildcats were nervous about the status of TyTy Washington after his injury against Florida. He did start the game, but scored just 4 points and left in the second half. Their star Oscar Tshiebwe had six quick points to start the game, but finished with only 13 points on the night, as the Vols defense held him in check, especially in the paint. The Player of the Year candidate did add an astounding 19 rebounds, for another double-double. He is most certainly one of the best players in the country.

Even though the ‘Cats cut it to eight points at one point in the second half, it never felt as though the Vols were going to give this game up. Thanks to some 3-point daggers from Vescovi and Zeigler, Tennessee quickly got it back to a double-digit lead and never looked back.

Chandler said after the game that Tennessee showed the country who they truly are, and they are not the same team that lost to Kentucky previously.

“This game was personal. We went to Kentucky and didn’t play our best and I think they thought we were that team.”

There was a turning point in this season for the Vols, and it just so happened to be the previous matchup in Lexington. Besides the speed bump at Texas, this basketball team has continued to play with ferocity on defense. They’ve also responded in big way after the loss of Olivier Nkamhoua, who is out for the season. Rick Barnes has always said, “Next man up,” and this team is proving that point at the moment.

So, what do we take away from tonight? Well, Tennessee continues to play strong on defense and when the shots fall, they are a tough team to beat. As for Kentucky, they will be just fine, especially when TyTy Washington gets healthy, so don’t worry about them right now.

But Tuesday night was about Tennessee making a statement that this current SEC winning streak is no fluke and they are a team to be reckoned with. We will find out real quick if they can continue playing like this, with a trip to Arkansas on deck.

After the game, Zeigler came riding onto the court on a scooter while Coach Barnes spoke to the crowd during his postgame show. As he was scooting by, Zeigler told Barnes one thing.