Those who are quietly most ashamed of their past are found at the forefront of the cancel culture movement, a self-serving quest to ruin careers and lives.

Christine Davitt, a senior social media manager at Teen Vogue, was among the miserable staffers who authored a letter, a staffer who spent her past tweeting out the n-word. Uh, what?

Here’s Christine Davitt, who claimed McCammond shouldn’t have a job because of her too racist teenage years, via Fox News: 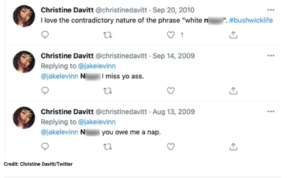 At the time of reporting, Davitt had not deleted the tweets but switched her account from public to private.

For what it’s worth — and to Twitter, everything — Davitt says she is of mixed Irish and Filipino descent.

Less than one hour after McCammond announced she would not join Teen Vogue as editor-in-chief, Davitt celebrated that she helped ruin the young woman’s life:

“So proud of my @teenvogue colleagues,” Davitt goes on. “The work continues…”

The successful attempt to wreck McCammond’s career at her brightest moment is sickening, a word that also describes Davitt’s character. Did Davitt forget her past while calling for McCammond’s ousting, or was she hoping it’d cover up her own history? If one joins Team Cancel Culture, they can’t be fired themselves, right?

I am not calling for Davitt to be fired for tweets from 2009, but if McCammond had to go in part because of Davitt’s letter, these devious cowards have questions to answer.