Imagine being out on a Springfield, Missouri golf course when you start hearing police sirens and a helicopter overhead and then see a Jeep flying at you. Of course you turn on your phone and record that action because your friends aren’t going to believe a guy just drove past you on the 15th green. That’s exactly what happened to a group of guys enjoying golf Saturday at the Horton Smith Golf Course.

Two suspects were taken into custody, including the 18-year-old driver, for stealing the Jeep. Listen closely to the video. It sounds like someone in that Jeep let out a “Roll Tide.” Play it a few times.

Investigators first spotted the Jeep Wrangler without license plates near West Bypass and Kearney Street. Deputies then determined the Jeep was stolen and began a pursuit, which ended shortly after 5:30 p.m. near Battlefield Road and Scenic Avenue.

The Jeep was tagged with a Star Chase GPS tracking device, allowing Greene County deputies to track the vehicle from a distance.

Over at hole 15, Aaron Samek thought it was a joke at first. ”He looked like he was having fun, didn’t looked stressed out,“ Samek said.

”After that we just ended up playing our game.” Davis Southard said.

Look at this. Not a care in the world even though the local police have dispatched a military force to take him down. 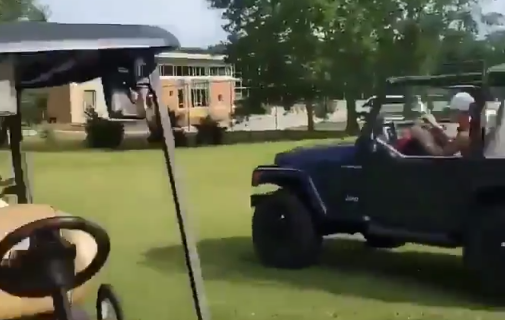