On Tuesday night, Kerr used his pre-game press conference to blame Senate Republicans for the shooting, claiming that they “refuse to do anything about the violence, the school shootings, the supermarket shootings” and that they put their “desire for power ahead of the lives of our children, our elderly, and our churchgoers.”

Now, Kerr has politicized the school shooting even further by partnering with Brady Campaign to raise money to defeat “NRA-backed politicians” in the Republican Party.

Brady Campaign is a gun control advocacy group founded in 1974. Though originally entitled the National Council to Control Handguns, it was renamed the Brady Campaign in 2001 to honor Jim Brady, the press secretary to Ronald Reagan who was severely wounded by a gunshot during the assassination attempt on Reagan in 1981.

Kerr has joined Brady and issued a fundraising statement on their behalf: 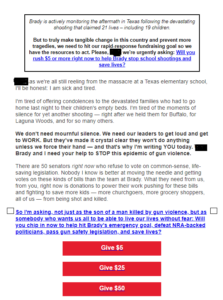 Much of the letter rehashes the same statement Kerr made on Tuesday, that he’s “tired of offering condolences,” “tired of moments of silence,” and that there “are 50 senators right now who refuse to vote on common-sense, life-saving legislation,” a reference the background check bill H.R. 8, which opponents say would not have prevented incidents like the tragedy in Uvalde.

In an effort to incite their emotions, Kerr reminds would-be donors that he himself is a secondary victim of gun violence: “So I’m asking, not just as the son of a man killed by gun violence, but as somebody who wants us all to be able to live our lives without fear…”

Unfortunately, Kerr did lose his father to gun violence, and for that, he has our deepest sympathy. However, he leaves out much of the context of that event because it doesn’t help his cause. Malcolm Kerr was not gunned down in an American elementary school or in the streets of a major American city. In fact, he wasn’t even in America at all at the time. Members of a group called Islamic Jihad murdered Kerr’s father, who was then the president of the American University of Beirut, as he was walking to his office in 1984.

Between the late 1970s and early 1990s, Beirut was ravaged by war and bitterly divided between Muslims and Christians. In other words, it was extremely dangerous. This geopolitical context does not lessen the severity of the crime against Malcolm Kerr and his family, but it does suggest that Steve Kerr has now reframed his personal tragedy to advance a political agenda.

Kerr then closes his Brady Campaign letter by reiterating his status as a victim of violence:

It is sad that Kerr is now using his father’s tragic demise to raise money on behalf of a political lobbying group, but we shouldn’t be surprised. He’s also using the deaths of 19 school children and three teachers to advance his political agenda as well.