Sometimes in life, you get the opportunity to write the final chapter in your book; for Stetson Bennett, he’s not done his. The Georgia quarterback announced on Wednesday night that he would be returning for one more season.

The fifth-year QB had the opportunity to end his collegiate career with a National Championship, but now he’s looking to add one more championship to his trophy case, returning for a sixth year. The savvy veteran took over the starting position from JT Daniels and never gave the coaches a reason to take it away.

Bennett made his announcement just over an hour after JT Daniels officially entered the transfer portal.

After leading the Bulldogs to a perfect regular season, he sought redemption in the playoffs, leading his team to a huge win over Michigan, which gave Georgia another opportunity at Alabama. Coming off an average performance in Atlanta, Bennett threw for 224 yards and two touchdowns against the Tide last week in Indianapolis. He was awarded the offensive MVP and also held up the CFB Playoff trophy, breaking a 41-year drought for Georgia.

After turning the ball over against Alabama in the second half, Bennett drove his team down the field and took the lead, putting the final touches on an incredible season. After the game, Bennett had this to say about not having the game end with his turnover.

“I just knew there was going to be no way we were going to let a turnover like that stop us from winning the national championship,” Bennet said. “I wasn’t going to be the reason we lost tonight.”

For the folks that were looking towards the inspirational part of his story, going from walk-on to the starting quarterback, Bennett had one simple message.

“I hope it gives somebody a little hope,” he said. “Just keep fighting, keep your mouth shut and work hard. Life’s tough, you’ve just gotta fight through it.” 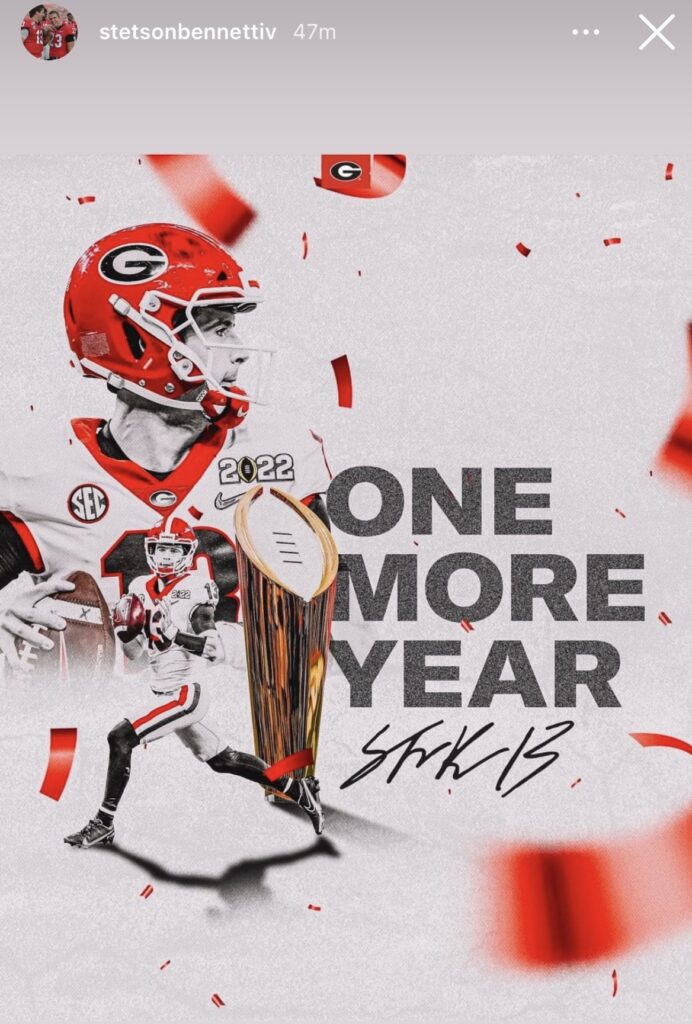 His legacy in Georgia was already cemented, whether he returned or not, but this gives Kirby Smart an opportunity to run it back with his cool and collective quarterback. It should be noted that the Bulldogs do have a stockpile of talent at the position and his starting spot isn’t guaranteed, but his return will help this coaching staff.

Let’s also not forget the amount of money Bennett will be earning from NIL deals. He’s been the face of ‘Raising Cane’s’ and will almost certainly be one of the highest earners next season under the new rules. Coming back for another season would most likely make him more money than any kind of professional team could offer him, in his position.

During his postgame news conference, the morning after he hoisted the trophy, Bennett said he wanted to win a championship at Georgia.

Now, he will get another opportunity to bring one more title to Athens before his college career ends.