We are coming to that point in the year before college football season where schools are looking to get rid of extra ticket inventory, with kickoff three weeks away. South Carolina has come up with a great way for fans to purchase tickets, while also picking up their groceries and cleaning supplies. A partnership with Costco could make this an easy transaction.

After Louisville jumped into the mix in early July, starting to sell ticket packages and Costco’s around the state, the Gamecocks have followed suit. We’ve seen college programs around the country look for different ways sell to sell tickets and a few schools have found an innovative way. If you have a family strolling through the cereal section and come across an advertisement for Gamecock football, they might jump at the chance to buy up a pair. 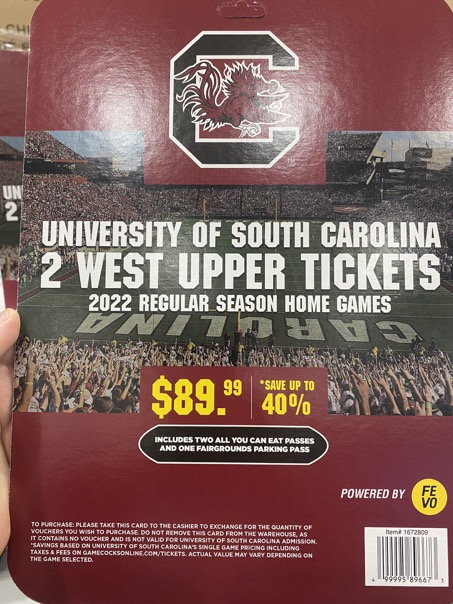 We are looking at a growing problem with a number of teams around the country where the non-conference game is not going to sell as well as a conference game. We’re also seeing that fans don’t want to waste money to travel to as many games now than they once did. I noticed numerous times last season where even schools like Alabama, Tennessee, Florida, Arkansas and others had a number of open seats, sometimes due to visitor allotments not being bought up.

This is where South Carolina has joined Louisville in using the retail giant to push tickets, hoping that the average family jumps at the opportunity to checkout a game for a low price. Included in the package you will get two parking passes, along with two all-you-can-eat concession vouchers, for a price around $89. Fans have to pick between five games to attend, which include Tennessee, Missouri and Texas A&M, along with two non-conference games.

When reached for comment, South Carolina issued the following statement.

“The Costco partnership was attractive due to their success working with MLB brands like the Yankees, Mariners, and Giants where they were attracting predominantly new fans into their stadiums. We also value the exposure across the state that Costco provided. The Costco community is very engaged as evidenced by how aggressively these single game promotions have sold so far. While we were one the first two college football programs to hit shelves, others will be released in the coming weeks. Our goal is to give our team the best home field advantage possible, and filling every seat with raucous Gamecocks fans makes for an intimidating environment.”

I hope South Carolina fans have updated their Costco membership cards. I’d hate to be denied entry because of an expired ID.