The Snickers candy bar company apologized to China on Friday for calling Taiwan a country in a recent advertisement.

Mars Wrigley, the parent company of Snickers, released an ad that says the company would launch a new limited edition candy bar in the countries of South Korea, Malaysia, and Taiwan.

The company quickly published an apology to say it would revise the language to no longer suggest Taiwan has any freedom from China.

So Snickers just sided with Beijing’s dubious claim that the island is its to control. Similarly, WWE superstar John Cena apologized to the Chinese Communist Party last summer for also calling Taiwan a “country.” 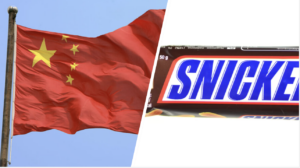 These groveling apologies show a willingness to bow to the CCP because it’s financially advantageous.

American celebrities and brands are apologizing for stating a fact, that Taiwan is a country, to ensure widespread distribution in the Chinese market.

Now, we await the candy bar-maker to lecture the country on social injustices. That’s how it works: bash America, lick the boots of China.

Pathetic. By the way, Snickers ranks among the most overrated candy bars, anyway.