I’ve been talking about it ever since Tim in Texas sold me on the idea of his Gauntlet league where eight league members draft four NFL teams and you have a battle to see which person can have the most victories by the end of the year. There’s no changing lineups. No waiver wires. No worries about bye weeks. You have your four teams and they just need to win, baby.

But first comes the draft. Michael J. needed an eighth guy and asked if Screencaps had someone who’d like to step up, so I joined his league. I have no idea who Michael J. is or any of his friends. That doesn’t mean I’m not against taking their money.

This is where the strategy comes in and why Tim in Texas gets so jacked up for his Gauntlet drafts. After tonight comes the easy part. You just sit there and root for your teams for 17 weeks.

My strategy going in is to let guys overbid on teams like the Cowboys, Packers, Chiefs and Buccaneers and Steelers. I’ll try to load up on 10-win teams and then hopefully I have enough money left over to get the Broncos or Falcons who are sitting on two of the easier schedules.

• Speaking of fantasy football, I know tonight is a huge night for fantasy drafts around the world as people get the juices flowing for the NFL season. I saved this email from Pete G. specifically for today because it’s going to get you guys thinking of all those years you’ve been playing fantasy football.

Take it away, Pete!

Love your daily columns. Read them every day while eating breakfast (I’m out west in Arizona). You were talking about Fantasy Football leagues a few days back so wanted to share with you that I have run a fantasy football league (Called the Thunderhead Fantasy Football League) for 33 years and we are about to start our 34th season with our draft next week.

I know there are league’s out there that have been together a little longer but we have to be one of the oldest and maybe the oldest 16 team league so was curious what kind of age some of your readers fantasy leagues have existed for. We started with 12 guys connected geographically and through work in San Diego back in the day and after 2 years went to our current 16 team size and remained that way the last 32 years.

Try drafting in a 16 team league on for size, not for amateur football fans… If you get the first pick, our serpentine format makes your next pick #32, (yeah, that’s a nice fun wait after that first pick), then #33, and then #64. That is a lot of top-end talent gone between your first 2 and then first 4 picks…  You draft 12 players overall. You have 2 minutes to make your pick or the system will pick for you. Our rosters have 2 QB’s, 3 RB’s, 3 Wr/TE, 2 kickers and 2 defenses. Your starting lineup is a QB, 2 RBs, 2 WR’s, a kicker, and a defense.

13 of our 16 owners have been in this league 20 years or longer so there really aren’t any novices that make bad draft picks to help you out. They all know what they are doing making having a good team even tougher every year. It is a relatively basic scoring league with plenty of add-on-point possibilities (100 yds rushing/receiving, 300 yds passing, sacks, picks, fumble recoveries, Field goals, longer FG’s, etc.).

We don’t have games where the score is 1234 to 1121 or anything like that. We have normal football scores like 38-34. We wanted our scores to more mimic real football games so have kept the point system down intentionally which makes drafting and free-agent acquisition more challenging. We also random draw the division alignments now so each year you can get matched up with other teams so get to play everyone over a year or so while we still ensure the long time rivalries meet up each year by adjusting the nondivision/conference schedule as needed to make sure they get to play.

The league winner keeps a rotating league trophy for the year they reign with their name on it. As champ they then also get a little trophy next to their name in the standings the following year while we make the last place team have a toilet next to their name that same following season. Our playoffs have half the teams (8) fighting for the Championship and the other 8 teams trying not to finish last or being called the Beer Loser. We have a definitive finishing order for all 16 teams when the playoffs are done. The loser or last-place finisher owes the commish (me) additional Beer money plus they get the toilet next to their team name the following year to remind them they sucked worse than anyone else the previous year.

We have a weighted lottery for the first 8 picks of the draft which comprise the 8 teams that did not make the playoffs (Beer Bowl teams). Picks 9-16 are the inverse order of the final standings where the team that won the title picks 16th, runner up 15th, etc.).

We have owners all over the country including in Florida, West Virginia, New Jersey, Minnesota, Louisiana, Virginia, Nevada, California and Arizona. I started the league in a paper world using a typewriter and copy machine where I would hand out weekly updates after calculating them from the newspaper box scores and as we spread out across the country with owners moving away, I would send out weekly results through the mail so Mondays were really busy for me so they could get the newsletters before the next game. We had 7 person rosters back then so all players you drafted played each week.

Transactions were phone calls to me requesting a player, always in a first come first served format and that still exists today with free-agent pickups through the site. The attached picture shows my yearly collections wrap-ups going back to our initial season in 1988. We moved ‘online’ through ‘AOL’ in the early 2000’s before moving to this site in 2004. We did drafts in person early on at beer-guzzling pool parties and then went to phone conference call drafts with some folks mailing in draft lists and we now have an online draft through the website and an active message board where we razz each other constantly as the season gets going. It is a football-only site, no politics or stuff like that. Only football. It is our escape from all the BS out there.

If you want to check out our league home page to get a glimpse, I added the link below just for you. You should be able to highlight, right-click and open the link to get there. If you go to ‘My leagues’, you will see links to our previous seasons. We have a banner at the top with the teams helmets and logos next to their names. In any case, keep up the great work. Thought you would find it interesting to read about a really old Fantasy Football League and was curious what other old Fantasy Football leagues may be out there, especially if they are 16 team leagues. Can’t imagine there are many of them.

• John Shelby Hadden wants you guys to take a listen to his new single, “Tailgate Time in the SEC.” John says he’s hoping the song with “contribute to the momentum of full and festive game days.”

• Grain Infuser sent in this shot from Thursday’s Vols game. This is pure Screencaps, guys. You’re getting the hang of it! 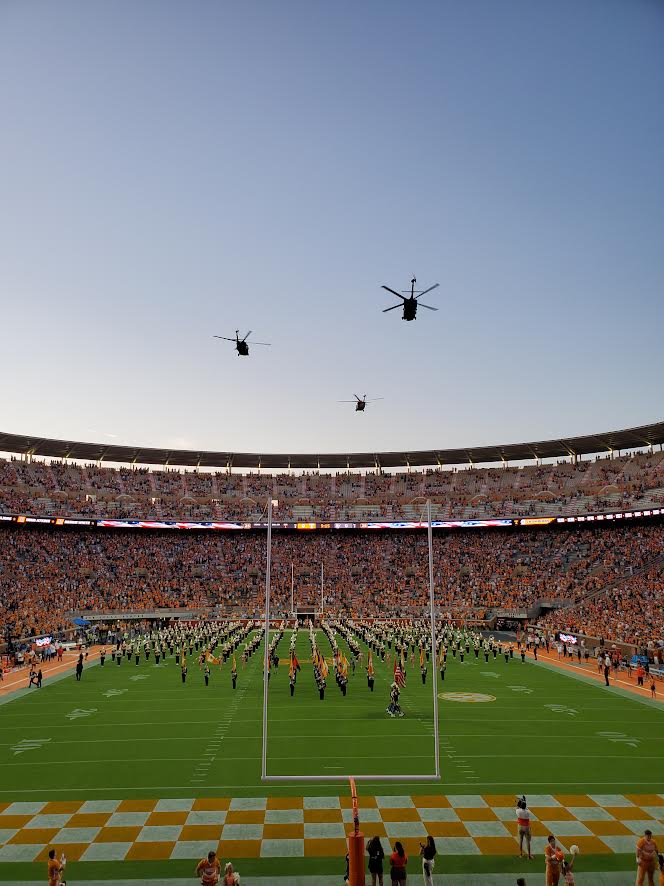 • Jessica W. wrote in over the weekend after I kept mentioning “See something, say something” as our theme this fall for Screencaps. It’s a call to arms encouraging you guys to send in material and join in the fun.

So Jessica fired up the email app:

I’ve been off social media for years now, but I rely on you to keep me in the loop with what I’m missing (well, not the ladies’ screencaps, but all the rest!). This is from 2015 (clearly a throwback with Fowler on Gameday), but my husband and I still laugh about it every year. I can’t believe this was allowed on air, but I’m glad it was!

Thanks for all the lighthearted fun on Outkick. Keep up the good work! 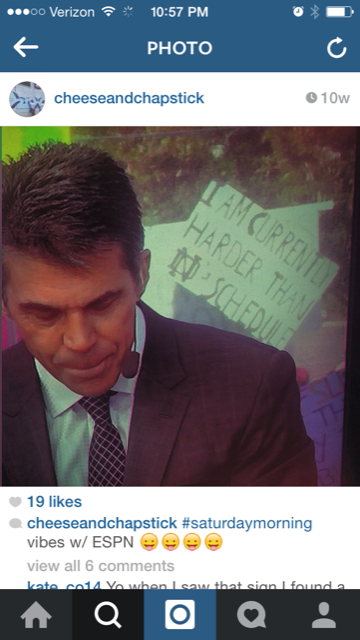 • And that should do it for this Wednesday morning. Again, emails are piling up. Keep them coming. Screencaps is BACK to a seven-day-a-week operation through football season so you cannot possibly out-content me for the next five months. Pile it on. Slide into the DMs. Tag me on content. Do not text my phone if you have my number! That’s going too far.

Nelson Cruz and Mike Zunino of @RaysBaseball are the second visiting duo all-time to each have 2+ HR and 4+ RBI in the same game at Fenway Park.

Thank you @NFL for trotting out Ed Sheeran for Thursday's pregame show. League members will be expected to mow during this performance. pic.twitter.com/0QCgsYsFVC

Ok, let's slow down on benching Spencer Rattler for now, I think we have found the source of his problems and it looks to be an easy fix! #BoomerSooner pic.twitter.com/JIjdp1TtOb

Me now vs. me the last time the Browns were good https://t.co/EfgjWOu1jJ pic.twitter.com/56It55T0fz

Marlins Man tells me his ticket has been checked three times. pic.twitter.com/z6nPKCCbM7

Joe Biden on tornadoes: "…they don't call them that anymore…" pic.twitter.com/HwkpYzv8bm

Nevada could be getting a $400-billion city in the middle of the desert. pic.twitter.com/Hy1V4kja9T

"We don’t know them all but we owe them all:" Sherry Kennedy created this amazing sand sculpture with family on the beach in Pawleys Island. She said it is a tribute to all who serve, have served, and those who have given everything. pic.twitter.com/9gPbKo5Cwj