In a video posted to Twitter, Gottlieb disapproved of Biles leaving her team out to dry and then asked the rhetorical question: what if that had been LeBron who had quit at the most crucial moment? Gottlieb’s response to Biles’ decision was rather moderate, no more controversial than the average radio and TV personality’s take. He asked questions and correctly noted that the media has different standards for different athletes.

How dare Gottlieb think for himself and not check with Jemele Hill before criticizing a black athlete! CNN was not happy, and called Gottlieb and other critics of Biles such as Charlie Kirk simply “white males,” as though that’s supposed to be a pejorative rather than a descriptive term.

Check out the creative chyron: 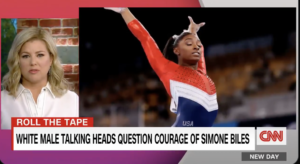 That will get them.

You’re probably asking yourself what Gottlieb’s and Kirk’s white skin color has to do with their commentary on Biles. Does this mean we start calling Brianna Keilar a white female talking head or Don Lemon a black male talking head? These are reasonable questions to process in your mind. But, please, stop asking these questions. White men are the problem, and we should treat them as such. At least, that is what blue-chip TV networks tell us to do.

For CNN viewers, few labels are as damaging as “white male.”

See, the white male talking heads chyron signals to the far-left that they must immediately stop what they are doing, hop on Twitter, and call some white guys racist. Or privileged and bigoted. And maybe even terrorists.

In 2021, white men in sports media are supposed to use their platform to apologize for their race and gender. For whatever reason, though, Gottlieb doesn’t wake up with the guilt others demand from him.

“If you want to have me on, it isn’t hard to reach out, but the labeling of my race makes my commentary somehow race based? Why would you do that?”

Gottlieb’s last question has a simple answer. TV networks plan to fight racism with actual racism. CNN and ESPN hosts, writers at the New York Times and Washington Post, and blue check Twitter users exclusively view subjects through racial lenses. In this case, Simon Biles is a black woman. Thus, she falls in favor of the press, no matter what she does.

When someone offers mild criticism of Biles, media members reframe it as criticism of a black woman, not of Simone Biles. If the critic happens to be a white male — Gottlieb, Kirk, or Will Cain — the media see it as a white man criticizing a black woman. Therefore, CNN and ESPN view even the mildest criticism as harsh and racist.