The Southeastern Conference issued a statement on Monday evening in regards to the controversial call during the Auburn-Ole Miss game this past weekend. The statement acknowledged that the decision against reviewing a key kickoff return was a mistake.

Here is the league’s statement that was issued on Oct. 24:

On the kickoff return in the Auburn at Ole Miss football game at 5:43 in the 4th quarter, the SEC has determined the replay official should have stopped the game for further review of the play. In the football officiating replay process every play is reviewed but, when appropriate, the game is stopped for further review.

Because the play was not appropriately stopped for further review, the necessary slow-motion view of the play was not viewed by the replay official to determine if the ruling on the field should have been reversed.

The SEC Office conducted a review of the play and appropriately communicated its findings above to Ole Miss head football coach Lane Kiffin and other athletics department personnel per conference protocol. However, Mr. Kiffin’s use of social media Saturday following the game to publicly criticize officiating is in violation of Conference Bylaws and Commissioner’s Regulations that govern Sportsmanship and communication with the Conference Office on officiating issues.

It’s an unfortunate error that made a significant impact on the game, as it would have given Ole Miss an eight-point lead late. Instead, the Rebels dropped to 1-4 on the season while Auburn moved to 3-2.

The call has drawn criticism from a large portion of people, including Lane Kiffin himself. The Ole Miss head coach retweeted a tweet that was posted attacking SEC officials for the poor call. Kiffin’s frustrations are clearly justified, but that didn’t stop the league from taking action.

Here is the second part of the SEC’s statement released Monday:

Ole Miss head coach Lane Kiffin has been fined $25,000 for his use of social media Saturday after the game made in violation of SEC Bylaw 10.5 related to officiating in the Auburn at Ole Miss football game of October 24.

SEC Commissioner’s Regulation. Football. Officials. (SEC Bylaw 10.5)
Criticism of officials or the officiating program by institutional personnel is absolutely prohibited. Comments on officiating are to be directed only to the Conference office. All reports or comments pertaining to officiating or game management responsibilities, or concerning student-athletes, coaches or officials, shall be directed only to the Conference office. Public comments related to officiating by officials, coaches or institutional personnel are prohibited.

Fines levied against schools and individuals in the Conference are directed into a fund supporting the SEC’s post-graduate scholarship program.

Here is the tweet that Kiffin is being fined for retweeting:

Y'all are a disgrace @SEC your officiating is absolutely atrocious. @SECOfficiating

If y'all want to just keep gifting Auburn wins, just say it. pic.twitter.com/LJ01avk5ZI

It’s unfortunate that Kiffin was fined for pointing out a mistake that the SEC admits to making. But rules are rules, we suppose. 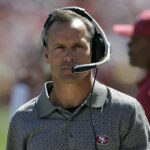 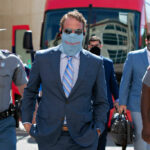