As you’ve all witnessed by now, Neyland Stadium was on full display Saturday night, after fans located in the student section littered the field with trash. What some folks are failing to realize is why this happened and what led to it. In no way am I condoning the actions of what happened on Saturday night, but let’s also not act like this hasn’t happened before. The bigger picture in my eyes is what the SEC is going to do about the officiating and why it has come to this.

Let’s go back to the Mississippi State vs. Memphis game earlier this season, where the Bulldogs were hosed on a punt, that was returned for a touchdown. The officiating crew that was responsible for this game at the Liberty Bowl, were called out by the conference for screwing up the play, that resulted in Memphis being rewarded a touchdown. Turns out, the play should’ve been blown dead, after the back judge gave a signal to “stop the clock”. According to a conference release, the ball should’ve been placed at the spot where the official blew the play dead. Meaning, no touchdown. Also, on the same play, there were two Memphis players wearing the same jersey number, which is a clear penalty. The SEC actually released a statement regarding these plays. 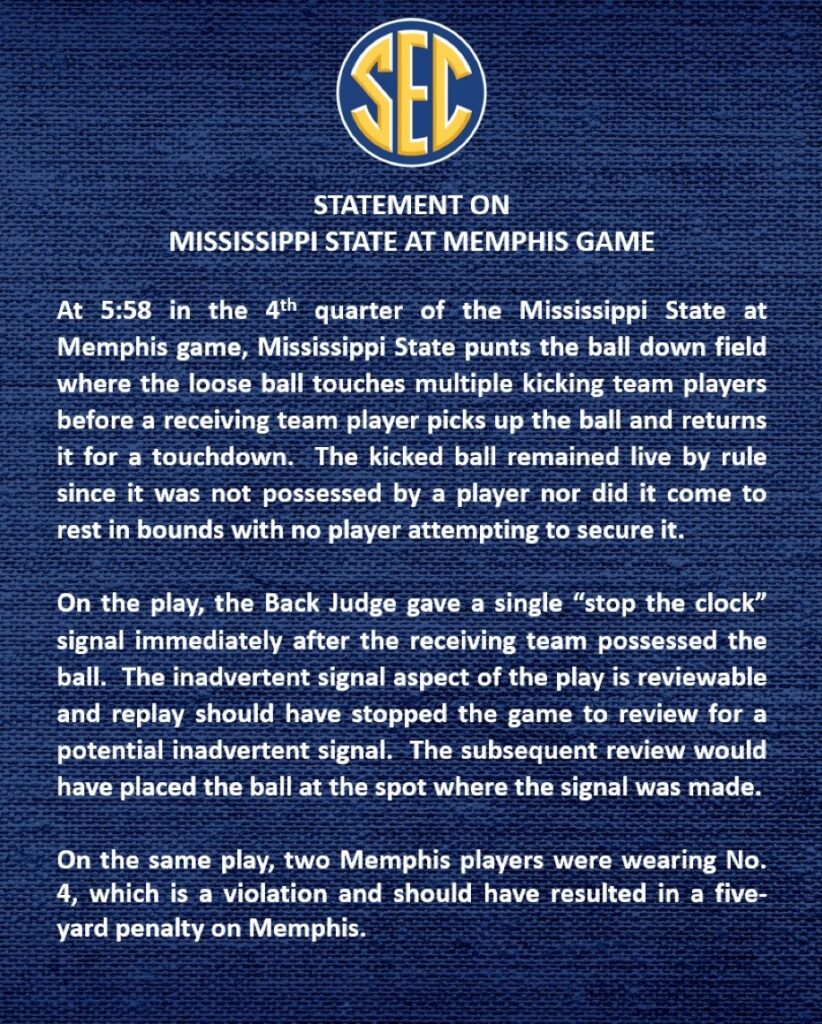 Another play the SEC looked to screw up on Saturday, was in Fayetteville, where Jarquez Hunter fumbled the football while in the air, which should have resulted in Arkansas receiving the football. The officials reviewed the play and concluded that Hunter’s forward progress was stopped, which resulted in the fumble not happening. You can be the judge.

Not a fumble. Auburn ball. Got it 👍 pic.twitter.com/dkJAXxN4ZH

Ok, let’s go back to Knoxville. Remember the officiating crew that was on the call for Mississippi State and Memphis? Well, that same crew was on the call for Tennessee vs. Ole Miss on Saturday night. So, we shouldn’t be surprised at the outcome of a significant play in the first quarter.

During the first quarter, with 5:53 on the clock, things turned sideways for SEC officials again. As Matt Corral took the snap, he faked the hand-off in what looked like a designed play, as he was stripped of the ball and Tyler Baron took it to the house for what was thought to be a touchdown. As Baron was running towards the end-zone, an official was running right behind Baron towards the checkerboards. There was not a whistle blown on the play and the head official was also running with the play, stopping around the 10-yard line. After the official huddled up, they then decided the quarterback was “Under Control and Progress Was Stopped”, which is mind-blowing. How do you make that call, after not blowing the play dead? There wasn’t a single official that technically stopped the play.

UPDATE: I have received a response from the SEC in regards to the play in which Tyler Baron returned what was thought to be a fumble on the field, at the time.

“On the play you have referenced, the officials huddled after the play and determined that forward progress had been stopped therefore there was no fumble on the play.  It is not uncommon for officials that are not certain in real time of the status of a loose ball to let a play finish before gathering together to compare notes to correctly officiate the play.”

How is this not a touchdown? No whistle. Quarterback isn’t down. Total garbage. pic.twitter.com/qggexDLr9E

The crowd was just as confused in Knoxville, as they were in Fayetteville earlier in the day and especially in Memphis last month. This is the same official that was part of a crew that was suspended in 2009 for two blown calls late in that season. He gave an interview to AL.com at the time about being suspended for the calls his crew had made and the mistakes he discovered while reviewing them.

The ongoing problem in the conference has been the week-to-week officiating and how they shouldn’t be having these problems. Look, I understand these officials are human and make mistakes, but this is the biggest conference in college football, so mistakes like these shouldn’t be the talking points during games each week. I don’t know how they can get better, I am not an official, that’s up to the conference to figure out. But, we can’t keep having these discussions on Sunday’s, wondering what could’ve been. Also, if you’ve had multiple problems with a crew during the season or through the years, maybe it’s time to move on from this crew and spend the money needed to find better replacements. We can’t just keep receiving statements or explanations during the games that make folks question the competence of the call.

This conference is too big for these types of mistakes, so hopefully things can be fixed. If not, we’ll be here next weekend scratching our heads and wondering what we just witnessed.

Accountability isn’t a bad thing, as it would be good for the sport.