Have you ever been to San Francisco, the real San Francisco? The city where you see people taking dumps on the sidewalks like it’s just another day, another dump? I spent eight days in the heart of the city during Super Bowl 50 week and got a serious taste of the craziness. I personally saw a guy taking a dump right on the sidewalk only to continue on down the street like it was no big deal.

Now let’s get to the latest craziness in the San Francisco Unified School District Arts Department, which is dropping its “VAPA” (visual and performing arts) acronym because “acronyms are a symptom of white supremacy culture,” according to the department director.

Here’s where things get interesting. Stick with me as we go into the mind of people who constantly think up ridiculous theories on what’s racist and what signals a “symptom of white supremacy culture.”

“The use of so many acronyms within the educational field often tends to alienate those who may not speak English to understand the acronym,” Bass explains.

Uh, that’s the first I’m hearing of that, Sam.

Bass, whose total compensation was $186,110.10 as a director during the 2019 school year according to state records, told ABC-7 he based his theories on the writings of author Tema Okun, who wrote a piece titled “White Supremacy Culture.” Good luck reading through that piece without your brain turning to mush. Okun writes that “Sense of Urgency” is a sign of white supremacy culture. She also has a section on “Worship of the Written Word” as a sign of white supremacy culture.

You get the point. The crazies are at it again. They have nothing better to do. Meanwhile, you can go to the S.F. Visual and Performing Arts page, where VAPA is still prominently displayed. It has to be enough to keep Bass up at night.

Guess who uses acronyms. Sam does!

Come on Sam, you can’t be throwing around acronyms like this. This is racist!

And what site has an entire glossary of acronyms associated with the LGBTIQ community? OutRight Action International. This isn’t good, Sam. Look at all this racism that’s prevalent in your own world. 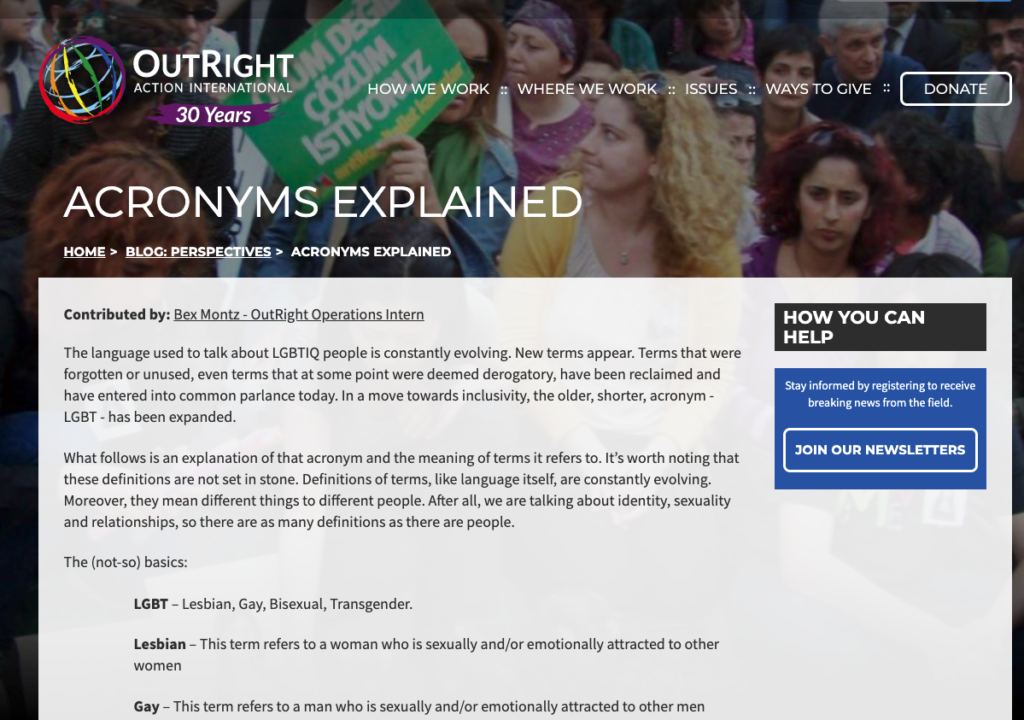