INDIANAPOLIS — It was beginning to look like an upset could be brewing inside GainBridge Fieldhouse on Thursday night, with Kentucky struggling to separate themselves from Saint Peter’s. A valiant effort from the Peacocks turned into one of the biggest upsets of the season, with #15 seeded Saint Peter’s defeating the #2 seed Wildcats 85-79 in overtime in front of a stunned crowd filled to the brim with blue.

This was the type of upset that has sent shockwaves around the country. I don’t think anyone outside of campus thought that the Peacocks would come down to Lexington and beat the mighty Wildcats in front of a home crowd. The fact we got to overtime was a testament to the effort put in by the Peacocks for the entire game. 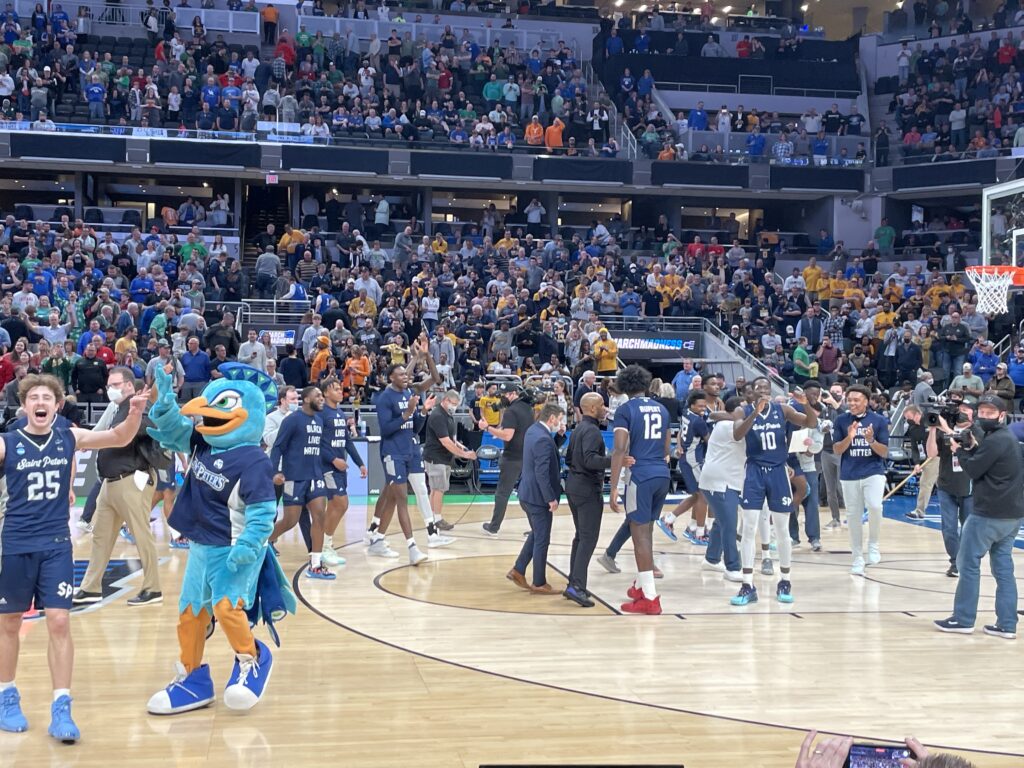 This looked like a Kentucky team that was waiting for someone else besides Oscar Tshiebwe to show up and help them get away from the aggravating Peacocks. Tshiebwe finished the night with 30 points and 16 rebounds, helping the Wildcats stay in the game. The Wildcats led by 8 points with just over three minutes left in the game, something John Calipari pointed out numerous times postgame.

Calipari said he wished he had answers for his players when they were up, but couldn’t finish the job. He kept referencing that he hoped that he could do enough to get them by this first game, hoping they could get comfortable in the tournament by escaping tonight.

“But again, this was probably something they never felt in their lives. And that’s why I wish I had some answers with three minutes to go to help them through it to get by the first one. But I tell you what, we missed shots, and Saint Peter’s made shots. They made threes. They made layups; we missed. They made free throws; we missed.”

“It’s one of those games that I was hoping I could get it by them to get them on to the next game to get their feet underneath them, and obviously I didn’t do a very good job with it,” Calipari added.

The Cats never looked comfortable, even when they had the size advantage inside the paint, something they didn’t use enough tonight. this came back to bite the Cats’ in a very big way. It was Doug Edert who hit the layup with :21 seconds remaining to send it to overtime, where the scrappy Peacocks never backed down, even when Kentucky took a 75-71 lead in the first minute of the overtime period.

Saint Peter’s outscored Kentucky 10-3 down the stretch to close out the win, moving on to the second round of the tournament. There is always that one team in the tournament that does something special and leaves us with incredible memories. Saint Peter’s is that team right now and will go down in history as defeating Oscar Tshiebwe in possibly his last game in a Kentucky uniform.

“Every team in the country thinks they can advance, it just comes down to one night and tonight was our night,” Saint Peter’s coach Shaheen Holloway said postgame.

Holloway took it a step further, noting that his players came into this game with a chip on their shoulders, knowing they could play with some of these bigger teams.

The Kentucky fans that took over the arena tonight were nervously biting at their fingernails in the final few minutes, watching this team implode in overtime. Folks were leaving their seats yelling curse words and asking themselves what just happened. I was just as stunned, having watched the Peacocks fight for forty minutes, then come back from a five-point deficit to get it to another five minutes.

It felt as if I was watching Rocky continue to land shots against Drago, hoping to chop the giant down. Then in the final round, Rocky (Peacocks) continued throwing vicious shots to the body, with Drago (Kentucky) finally hitting the canvas after the final shot to the head. They never gave into the crowd, the tension, the deficit or the name on the white jerseys.

Simply put, those young men weren’t backing down to anyone, especially when the Cats’ continued to let them hang around.

Daryl Banks III finished the game with 27 points, leading his team to the win. The Peacocks did the same thing other teams have done this season against Kentucky, which is let Oscar get his, but clamp down on the other Wildcats. This game plan worked again tonight, with Sahvir Wheeler being the second leading scorer with 11 points.

But this night is about the enormous win for Saint Peter’s and the earthquake it sent around the country. It looked as though they had watched how the Wildcats had been guarded over the latter portion of the season.

Before leaving the press conference stage, Peacocks head coach Shaheen Holloway was asked what March Madness meant to him.

“It’s not about your record. It’s not about what school you at,” Holloway said. “It’s whoever is good on that night, and tonight, it was our night.”

The college basketball world was shocked tonight by a small school that didn’t even bring a band or cheerleaders. It was a beautiful moment to witness the players and fans react to the win. Now they get to hang around Indianapolis for a few more days.

I guess the SEC Tournament actually benefited somebody and that would be Saint Peter’s, who watched the game film of last Saturday’s performance from the Wildcats and came in tonight prepared.