Although it looks weird in these times to say that a man making $5.7 million a year is underpaid, this is absolutely the case with Ryan Day at Ohio State. Every year, USA Today publishes the salary and projected yearly income of the highest-paid NCAA head football coaches. Day does not even crack the top 10.

Entering just his second full season as the head coach of Ohio State, Day has already proven he belongs in the top tier. After his team earned a playoff berth in his first season, Day deserves to be paid in the realm of the best coaches in America.

Bobby Carpenter, who played linebacker for Ohio State and the Dallas Cowboys and now co-hosts morning drive on 97.1 the Fan in Columbus, explains to OutKick that college football coaches have four main responsibilities:

1) Run the program at a high operational level

2) Recruit at a high level

“Day has a great support staff to handle the overall operations of the team, and a lot of that is the skeleton of what Urban had left there,” Carpenter says. “With his game-day operations, he does a fantastic job of understanding time and situation. He’s done a really good job of designing and calling an offense. Probably the thing that’s been the most impressive is his development of Justin Fields.”

In Ryan Day’s inaugural season as head coach last year, Ohio State went 12-0 in the regular season, beat Wisconsin in the Big Ten Championship Game, and had a chance to overtake Clemson in the final two minutes of the Fiesta Bowl and face LSU for the national title.

In his three seasons at Ohio State, the first two as offensive coordinator, he has also proven that he can develop quarterbacks. J. T. Barrett had his best completion percentage and most passing yards as a Buckeye in 2017. In 2018, Dwayne Haskins completed 70 percent of his passes and threw 50 touchdowns. Haskins became the 15th overall pick in the 2019 NFL draft. Current OSU QB Justin Fields is likely to be selected in the top five of the 2021 draft. Under Day’s guidance, Fields has developed both on and off the gridiron.

This past offseason presented unprecedented challenges, including the temporary cancellation of the 2020 Big Ten football season. A number of factors led to the reinstatement of the fall season, and OutKick was of them. Site founder Clay Travis brokered a phone conversation between President Donald Trump and Big Ten commissioner Kevin Warren to get the ball rolling.

But the Ohio State administration and Day also demonstrated profound competence and leadership as they openly advocated for restoring the fall season. University president Kristina Johnson spoke publicly about seeing a path to a return, and Ryan Day put pressure on the conference by saying he wouldn’t rule out Ohio State playing elsewhere if the Big Ten refused to let his team play. Day issued the following statement on September 10th:

Day was one of only a handful of Big Ten coaches who openly criticized the Big Ten decision to cancel the season. Scott Frost of Nebraska, Jim Harbaugh of Michigan, and James Franklin of Penn State likewise voiced their objections. Together these coaches made their voices heard, and the conference announced the return of the season on September 16th.

Justin Fields was the most visible player in the movement to return to play. A lot of coaches talk about empowering their players, but few would allow their quarterback to appear on national talk shows to criticize conference decisions. Day let Fields have his say.

“Ryan understands this generation’s athlete,” Albert Breer, an Ohio State alum who took over the MMQB column for Sports Illustrated after Peter King left for NBC Sports, told OutKick. “There’s no question about that.”

While past legendary football coaches have an authoritative “aura,” Breer notes Day’s sincerity.

“Ryan’s a real dude,” Breer continued. “If you’re around him, you know that. He’s just easy to have a conversation with. I’m from the same area as him, so the way he carries himself he could be any one of my buddies that I grew up with or went to college with. He just comes off as very normal. When you are that way naturally, with the way things have gone in the last year, it’s easier to defer to other people sometimes. He’s secure in his own ability on top of being humble enough to be willing to let somebody else lead on certain things, and not really worrying as much what could come of that.”

“Most coaches like to be the face of their program, and they always want to control all of the messaging,” says Bobby Carpenter. “The reason they do that is due most simply to the fear of what someone else will say if they’re put in front of a microphone, that would disagree or not be in linear agreement with the branding and the messaging that they put out. A lot of that is the trust that Ryan has in Justin, and also understanding the type of players you’re recruiting, and the culture.”

Day also supported player parents who protested at Big Ten headquarters outside Chicago. Ohio State cornerback Shaun Wade is a projected first round pick. His father, Randy Wade, who organized the parent protest, tells OutKick he was appreciative of Day: “It meant everything. The fact that he was one of the coaches on the front line, vocally saying they should restore the season, just shows what kind of person he is and what he means to those kids. He knows how important it was to the kids and parents and the university. Without his part, and everybody behind the scenes, we’d never be in the position that we will be on Saturday.” 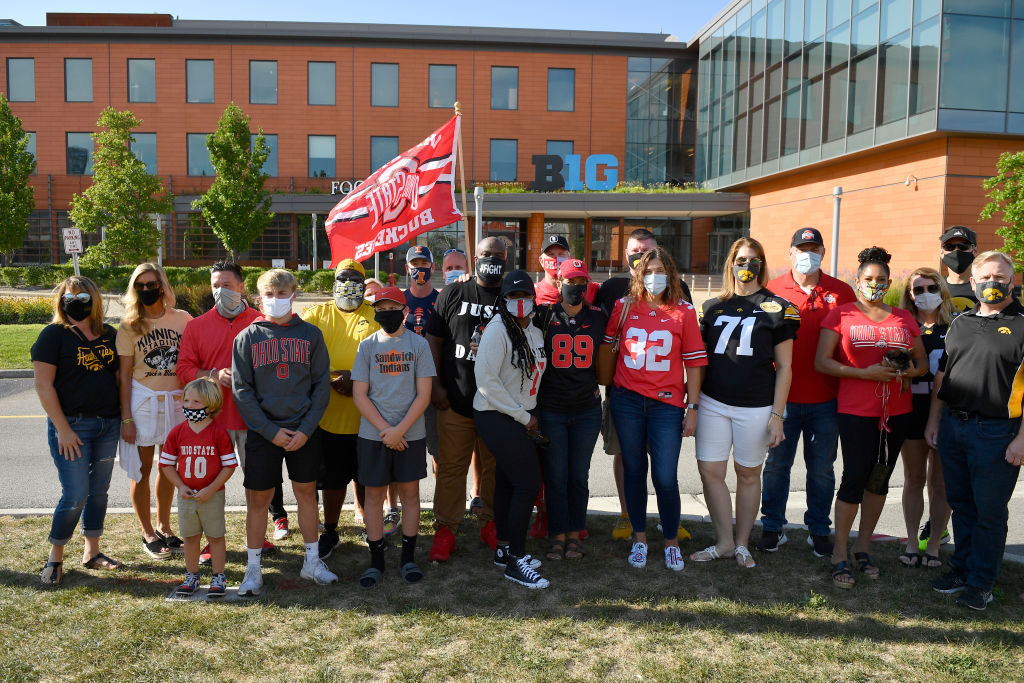 The elder Wade says that he kept Day and his staff in the loop about their plans, and were able to go about their business without any meddling: “He appreciated the fight that we did and just kind of left it at that.”

You might be reading this and saying to yourself, Okay, I get it, people like Ryan Day. But he replaced Urban Meyer at Ohio State, so the systems were already in place. Of course he was going to win football games in his first year.

Don’t be so sure. It’s not easy to replace someone like Urban Meyer. In his six seasons in Columbus, the Buckeyes never lost more than two games in a year, and won the 2014-15 national championship. In 2004, Utah went 12-0 in Meyer’s last season. The year after Meyer left, the Utes went 7-5. Will Muschamp succeeded Meyer at Florida and finished with a 27-20 record, exiting after three seasons. College football history is littered with coaches who failed to live up to the success of predecessors who won national titles.

“There’s kind of a super-team thing happening in football. I want to play with the other guys who are on this level,” says Breer.

Day has already sustained that status for Ohio State. OSU’s 2020 recruiting class ranks fifth on Rivals, and their 2021 class is second only to Alabama.

Coach Day is stockpiling talent, and he’s not rigid about how everything will fit.

“Some coaches get stuck on system. System. System. System. They talk about that all the time,” observes Bobby Carpenter. “One of the first conversations I had with Ryan, he was talking about the talent that Ohio State has. Talent is always going to supersede system, and it’s really not different than anything else in life. You find out what type of people you have, what they’re good at, and then let them do that as much as possible. And if you do that, you’re going to be successful as opposed to sometimes trying to pound a square peg into a round hole.”

Coach Day clearly has a gift for communicating with the myriad stakeholders of a college football program: administrators, players, recruits, parents, assistant coaches and support staff, and the media. His leadership style is more collaborative than dictatorial.

Shaun Wade’s father, Randy Wade summarizes Day’s character best: “Before the COVID even hit, we had to have a lot of communication. With Shaun being a high profile player, we just had to make sure that everything is right. Coach Day understood. He wasn’t pressuring us and he wanted the best for Shaun. He made sure everything was on point; every time we gave him a list of things that we needed, he just made sure it was done. He’s not just about X’s and O’s. He’s really about those players.”

He has definitely earned a bigger paycheck. Sooner rather than later, Ohio State will have to open up the checkbook to fend off suitors not just at the college level, but also in the NFL.