Rush Limbaugh routinely told listeners that he had to tie half his brain behind his back just to make it fair. Yet for his competitors, it still wasn’t fair. Fair implies they had a shot to compete.

The reaction to Limbaugh’s death this week exemplified his career, drawing opposite reactions from the Left and the Right. But as always, both sides of the country had a reaction. They cared, they were focused, they were impacted.

Author George R. R. Martin once said, “The worst thing for any work of art is to be ignored.” Limbaugh’s work couldn’t be ignored. It had too much of an impact.

A Republican could not win the presidency without Limbaugh’s support, and a sitting Republican president could not push an agenda that Limbaugh couldn’t sell to millions of Americans. In today’s media landscape, the most influential figures have niches, passionate followers. Limbaugh had an influence over his niche, which was half of the country.

While Limbaugh’s legacy will always read as a “conservative media pundit,” it extended well beyond that. Limbaugh was conservative, but more than that, he was a disruptor. He entered a field filled with followers of corporate media’s unwritten Bible, and if the word “Bible” was offensive to them, then its syllabus. Limbaugh was the first to use a different language, question other ideas, and think for himself. Limbaugh worked for his fans, not to appease potential critics. 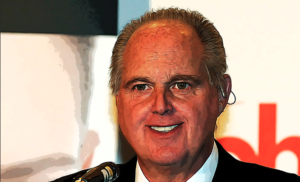 We know that Limbaugh is responsible for the successful careers of Sean Hannity, Mark Levin, Glenn Beck, Buck Sexton, and, in many ways, Fox News — but what’s less documented is how much we see him in so many other current disruptors. Inadvertently or by design, Limbaugh is everywhere. His curiosity is in Joe Rogan’s industry-leading podcast. Limbaugh’s appeal to the everyman is how Dave Portnoy’s groundbreaking media outlet sold itself. Tucker Carlson’s fearlessness on cable news’ No. 1 rated show echoes Limbaugh’s. In many ways, Donald Trump fought the same fight against the establishment in the White House that Limbaugh fought for decades on the radio.

Most high-profile jobs in the media come with a long list of prerequisites: get an Ivy League education, be bothered, wake up offended, take orders, and question only those allowed to be questioned. Those aren’t going away, they are as required as ever. That said, thanks to Limbaugh, there are now alternatives for men and women who went to everyday colleges or didn’t go at all. For personalities who bring real-life conversations to the air, not teleprompter reads approved by the highest of corporate cowards. For talents who relate to their listeners and see them as equals, not students. Limbaugh proved this is what Americans prefer, and that was the ultimate threat to the establishment media.

Listeners didn’t tune into Limbaugh for a topic. They tuned in to hang with him on the way to work, during their breaks, in their garages, during their rides to lunch. Limbaugh was part of millions of Americans’ daily lives. His show was personal. He cared about his listeners. He was family to them.

Rush Limbaugh didn’t need a network or a powerful exec to have an impact. He needed American listeners, which eventually grew so strong that over 600 affiliates gave up local programming to syndicate the Rush Limbaugh Show. There’s HBO’s Bill Maher, ABC’s Robin Roberts, CNN’s Anderson Cooper, MSNBC’s Rachel Maddow and NBC’s Chuck Todd, but no letters ever came before Rush Limbaugh.

Maybe it truly was talent on loan from God that made Limbaugh an iconic figure, or maybe it was his authenticity, rule-breaking, honesty, ideas, and independent presence.

The sports world spent two decades searching for the next Michael Jordan, and now it’s beginning to look for the next Tom Brady. The TV industry is actively trying to build the next Game of Thrones. Hopefully, those quests are successful, because finding the next Rush Limbaugh will not be.