Failed former CNN “talent” Roland Martin believes we should have a mask mandate on public transportation for life. Or at least the rest of his life.

Martin is upset that a federal judge in Florida overturned the mask mandate for public transit earlier this week, a ruling which the Biden administration said it will likely appeal.

The thought of people breathing freely on an airplane terrifies schmucks like Martin. And he’s not playing around.

Tuesday night, Martin took a selfie of himself wearing two masks and his goggles. Take a look, if you wish: 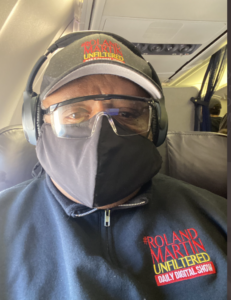 “I don’t give a damn what some grossly unqualified Donald Trump judge said, I’m double masked and wearing goggles on this Nashville to DC flight,” Martin tweeted.

“I had COVID in December. Y’all can KISS MY ASS about me not wanting it again. And any fool saying they don’t matter is a damn liar.”

Martin could have just worn his mask — and goggles — if he’s that afraid of COVID. But, of course, he needed to tweet about it.

What do the goggles even do? Does he think he might catch COVID through his eyes? Perhaps.

So either Martin is virtue signaling or there’s something seriously wrong with him. I’d guess the latter, based on his Twitter timeline.

In either case, Martin must’ve figured that he could not catch COVID at the local, low-level concert that he attended two weeks ago.

Same guy two weeks ago at some shitty concert. pic.twitter.com/4IJeyfwUXF

What a brave man.