The fact-checker links to the following two videos that insert ice cream music and an ice cream truck behind a clip in which Biden wanders around as U.S. First Lady Jill Biden gives a speech:

When your MKUltra trigger is ice cream truck 🎶 pic.twitter.com/5To9ZhRS1e

Maybe it’s just me, but I would have thought that the cartoon ice cream truck was real had Reuters not told me otherwise.

It sure looks real to me: 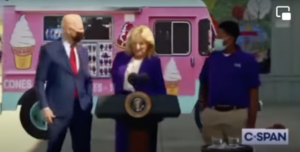 The writer published the following words to leave no doubt that the tricksters on the internet were trying to pull a fast one on Mr. Biden:

“At around the 01:35 mark, Biden can be seen walking out of frame and returning a few seconds later, but no ice cream truck can be seen in the video nor can any music be heard,” Reuters reported regarding the unaltered footage.”

And the “verdict” reads:

Fact-checkers are parodies of fact-checkers. They are the most useless figures in the corporate press.

The need to fact-check these videos is funnier than the videos themselves, and the videos are pretty funny.