Salt Lake City’s ABC-4 pinned down a story this weekend that station executives will be sending off to Emmy contests. Reporter Jason Nguyen, who calls himself an “Emmy nominated investigative reporter” went all Mike Wallace with his report on a Utah paramedic who donated $10 to the Kyle Rittenhouse defense fund. That’s right, i-Teamer Jason jumped all over a Guardian report on a data breach that resulted in the release of the paramedic’s name as one of those who donated to Rittenhouse’s fund.

Jason was so hellbent on getting to the bottom of this $10 donation that he showed up on the paramedic’s doorstep to have a talk with the man. “I tried to get the paramedic’s side of things,” Nguyen wrote on Twitter. 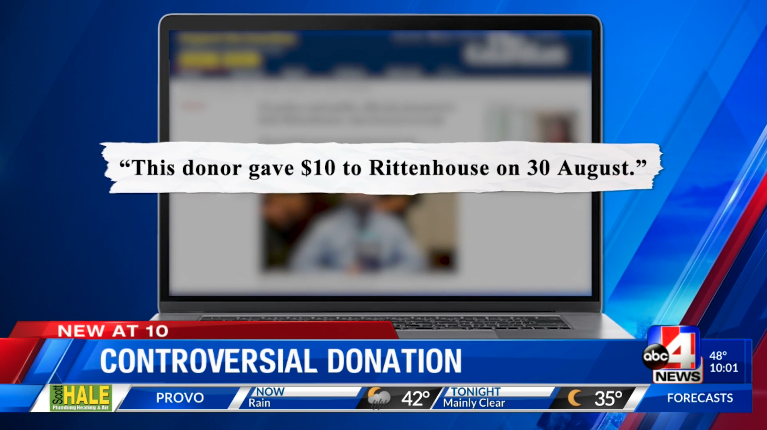 The i-Team bulldog followed up his report with news that the West Valley City Fire Department was now investigating the $10 donation by a fire department employee using a government email.

Let’s cut to the chase on this one. Jason didn’t care that the donation came from a fire department email account. That’s clearly not the story here, but that’s probably what will ultimately lead to discipline by the department.

Jason is here for the meat and potatoes. He’s here because a public employee donated to a legal defense fund as a war between two sides rages on. That’s the ratings winner for Jason. He knows the $10 is peanuts, but he also knows he has a big-time dividing topic and it was time to go balls to the walls. It was time to show up at the employee’s house and get that money shot. The goods. The shot that makes a news director fall to his knees in tears.

Jason shows up at a nice suburban house wearing his mask where the likelihood of confrontation is very low. It’s a stunning and brave move by the reporter.

And you can be sure Jason will be using this one in his portfolio down the road. He’ll point to the engagement as a feather in his cap as he hunts for a job up the ladder in television. The $10 donation paramedic story is just another step up that ladder.

A Utah paramedic donated to the defense fund of Kyle Rittenhouse. It was first reported in the @guardian this morning.
Rittenhouse is accused of killing two protesters in Kenosha, WI.
I tried to get the paramedics side of things. See the story tonight at 10p on @abc4utah. pic.twitter.com/sxGUzcrNwb