Here is what happened:

The Black national anthem, “Lift Every Voice and Sing,” is currently being played. Ravens players are lined up at the goal line, while the Browns returned to their locker room. It looks like one Raven is kneeling. pic.twitter.com/DfGlVdXpFq

Ravens players line up at the goal line for the rendition of “Lift Every Voice and Sing,” aka the Black national anthem. Matthew Judon and Marlon Humphrey kneeled. pic.twitter.com/k2kZrm1x2x

NFL players all over the league are kneeling during the national anthem.

We simply aren't allowed to enjoy sports anymore without politics being shoved down our throats. pic.twitter.com/0UuVMJ2zRP

Question: how can the Ravens argue it’s not about respect for the anthem when they stand for the black national anthem and kneel for the United States national anthem? They can’t. They’ve checkmated themselves.

And this is why the NFL ratings tanked on opening night.

Bad, bad look for all involved.

Other stories on Outkick today:

Video: Marlon Mack carted off the field after injury.

Idiot play alert: Lions’ Jamie Collins headbutted the ref then got kicked out: 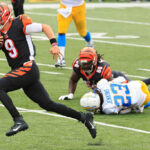 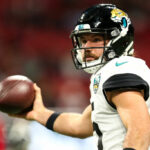