The bad boy Raiders might’ve changed their home address, but they’re still the same old bad boys causing trouble for the NFL and this time the shield is expected to drop the hammer on Jon Gruden and his organization for breaking COVID rules.

CBS Sports’ Jason La Canfora reported Sunday that the Raiders are “very likely looking at the loss of at least one draft selection for their repeated breaches of the policies” which include mask wearing and an unauthorized person entering the team’s locker room during a Week 2 game against the Saints. That was the same week when Gruden was hammered with a $100,000 fine for not following COVID mask rules.

Ironically, the NFL has yet to say anything about the thong mask Gruden wore during Week 3 in New England. Maybe they’re waiting to wrap that and Raiders players attending an indoor event while not wearing masks into one massive penalty that includes loss of draft picks.

The NFL is starting to postpone games over positive cases and the bad boys are clearly in the crosshairs of the league office for skirting the rules and taking chances they’re not supposed to be taking. 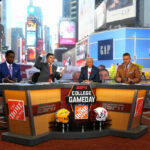 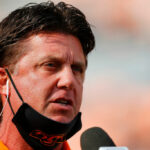