On Thursday, Russian state media claimed to air a live address of President Vladimir Putin declaring a “special military operation” in Ukraine at 6 am local time. Yet several reports say Putin recorded this address days earlier but had to postpone it for “reasons unknown.”

The reason for the delay probably doesn’t matter at this point, war has begun. Though the method used to uncover the delay is rather amusing. We can thank savvy internet sleuths for that.

Putin informed state media to label his address as “live.” He wanted Russians and the world to think he was declaring war in real time. But for someone so carefully crafted, he got a bit sloppy in his big moment — he forgot to change his suit.

Social media posts show side-by-side images of Putin from his address supposedly on Thursday morning and from his meeting with the Russian Security Council on Monday. He is wearing the same coat, tie, and undershirt in both images.

Quite possible this was pre-recorded, especially given the separatist letters were dated Tuesday.

At left, Putin's declaration of war. At right, Putin's angry, rambling speech from Monday night. He's wearing the same outfit, down to the tie. pic.twitter.com/Ydwu12IOLn

And because Putin is a man of many suits, ties and undershirts, it’s unlikely he wore the same combo just two days apart.

After all, Putin could have worn his nicely fitted blue jacket: 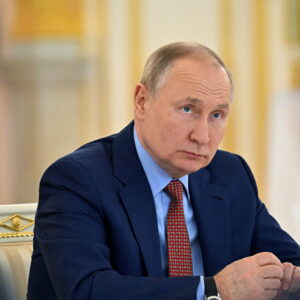 The Novaya Gazeta newspaper then confirmed what we already expected: The sleuths were correct. Putin did, indeed, record his declaration of war on Monday.

Citing metadata from the Kremlin website, Gazeta reports that Putin created the footage at 7 p.m. on February 21.

“Putin’s speech about the declaration of war was recorded on the evening of February 21, on Monday. You can verify this by downloading the video from the Kremlin website and checking its properties,” reads a translated tweet from Gazeta.

The Russian-based Conflict Intelligence Team took this information to mean that Putin’s large-scale invasion of Ukraine was planned for February 22, the day separatist leaders in eastern Ukraine requested help from Moscow.

So who is to blame for Putin’s sartorial mishap? Not Putin, of course. He’s not to blame for anything. Perhaps he will blame Sergei Yevgenievich, his chief spy whom he berated earlier this week. That guy is never getting out of the dog house, no matter how he dresses.